Bill Thompson will concede the mayor’s race today and endorse front-runner Bill de Blasio, according to sources familiar with the situation.

Mr. Thompson is set to make the announcement at a 11 a.m. City Hall press conference, amid growing pressure from Democratic Party brass–and even some of his own backers—to bow out of the race to avoid a contentious runoff contest and unite the party ahead of November’s general election.

Gov. Andrew Cuomo, who reportedly helped to broker the deal, will attend the event, a source confirmed.

Previously, Mr. Thompson had repeatedly refused to concede the race, saying he wanted to wait until all of the ballots from Tuesday’s election were counted. While Mr. de Blasio received 40.3 percent of the vote, with 99 percent of precincts reporting, thousands of ballots have yet to be tallied. That process continues, with the Board of Elections set to begin counting nearly 80,000 paper ballots later today.

Mr. Thompson needed Mr. de Blasio to drop below 40 percent to force the runoff election. The former comptroller and 2009 Democratic mayoral nominee reportedly made the decision to drop his bid after the machine tally held steady over the weekend.

The Thompson and de Blasio campaigns did not return requests for comment.

The Amsterdam News first tweeted the news earlier this morning. 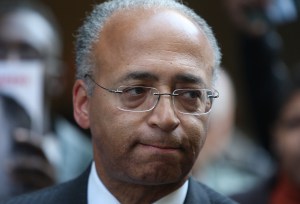