At 4 p.m. yesterday, he gathered with a former Republican senator and conservative Jewish leaders in a roped-off avenue in Crown Heights. An hour later and just a mile away, he was standing in a Bed-Stuy shopping plaza, rallying with liberal African-American congressmen and members of the teacher’s union.

Former Comptroller Bill Thompson, a Democratic candidate for mayor, is counting on this peculiar combination for Tuesday, hoping to forge seemingly disparate groups into a winning coalition.

“He doesn’t promise everything to everyone and give everyone the answer they may like to hear,” said former Senator Al Mr. D’Amato, surrounded by gawking Hasidim at the first event. He argued that that restraint helped to build trust. “When he gives you an answer,” he said, “you know that it is real.”

The message at the event, stressed repeatedly by Thompson backers including Assemblyman Dov Hikind and other more right-leaning Orthodox Jewish leaders, was that Mr. Thompson–unlike his front-running rival Bill de Blasio–was not a quixotic liberal who would have difficulty collaborating with people of all ideological stripes, including the city’s business leaders.

“We have been shocked and deeply embarrassed, as New Yorkers, at some of the candidates this race has produced, people who are engaged in class warfare, people who have no understanding of the real world,” said Jeffrey Wiesenfeld, a former assistant to Mr. D’Amato and ex-GOP Gov. George Pataki. “There are some 5,000 people out there, I’m not one of them, who pay about 30 percent of the taxes in this city. You may like them, you may not like them, but they have mobility.”

An hour later on Fulton Street, Mr. Thompson was rallying with influential left-leaning labor and congressional leaders, flaunting the ideological and racial dexterity of his campaign.

At the raucous rally, where shouts of “Tuesday for Thompson!” erupted every few minutes, speakers railed against the income inequality of the Bloomberg years and the challenges facing labor unions.

After the rally ended, Politicker approached Mr. Rangel, one of the more left-leaning members of the House, to ask him what he made of Mr. Thompson’s seemingly incongruous supporters, including Mr. D’Amato and himself.

“I had no idea that they even knew each other,” Mr. Rangel said.

Mr. Thompson brushed off suggestions that having a Republican like Mr. D’Amato stump for him tarnished his liberal credentials.

“I believe I’m a progressive Democrat and also, you look at my record,” he told reporters. “At the same point, the senator is a strong representative from this state and worked on behalf of this state for years … I’m happy to have his support.” 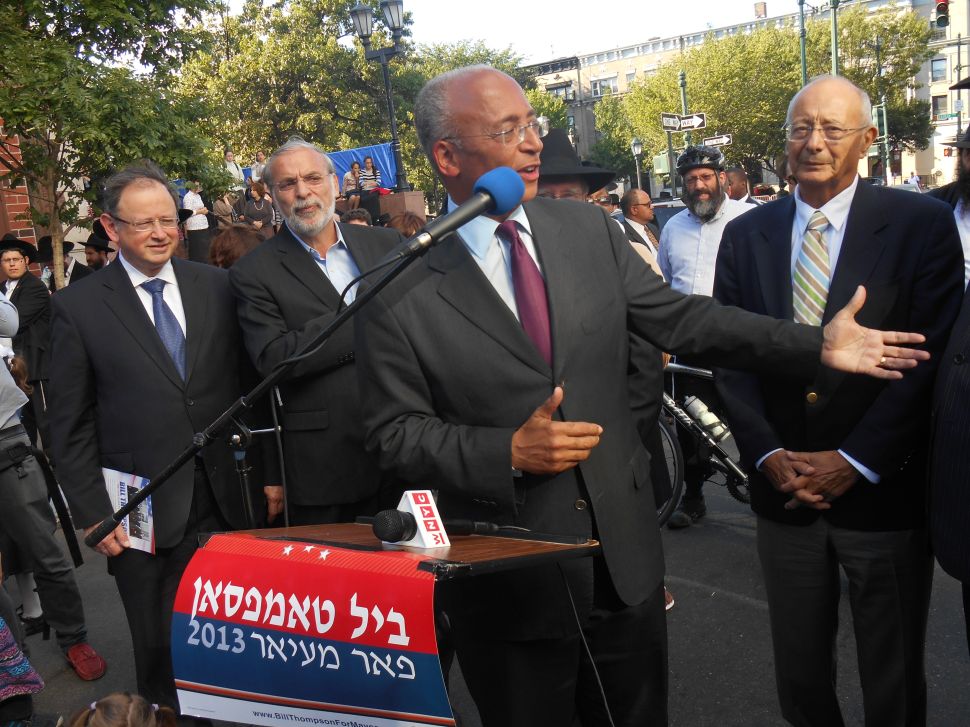