Former Comptroller Bill Thompson’s fate remains in limbo as the Board of Elections embarks on a manual count of outstanding ballots to determine whether or not a runoff will be necessary,

Front-runner Bill de Blasio sailed to victory with just over 40 percent of he vote, with 98 percent of precincts reporting. But the Board of Elections will not make a final decision until an estimated 19,000-plus paper ballots are counted–a process that will last into next week.

Without any sense of certainly, Mr. Thompson took to the stage at a Midtown hotel at midnight and congratulated Mr. de Blasio for running a good campaign. But as the audience chanted “three more weeks!” Mr. Thompson made clear that he would wait for “every vote, every voice to be counted” before making a final call.

“We took Mike Bloomberg on and we almost beat him. Now were gonna finish what we started,” the failed 2009 nominee told more than 100 supporters gathered in a ballroom at the Eventi hotel, decorated with blue and white balloons. “Every voice in New York City counts and we’re gonna wait for every voice to be heard. We’re gonna wait for every vote to be counted. So my friends this is far from over.”

A BOE spokeswoman said that poll workers would begin to open machines Friday, and will begin counting paper ballots, including absentee and military votes, on Monday.

Still, many of those gathered tonight maintained that Mr. Thompson was the most “qualified” candidate in the field, thanks to his experience as the former city comptroller and head of the Board of Education. They also spoke about his famously mild temperament–arguing it would have helped him  “unite” not “divide” the city as mayor.

A hopeful Congressman Gregory Meeks, an ardent supporter, argued that a Mayor Thompson would bridge the city’s great divides. “He’s going to unite the city like it’s never been united before,” he said, arguing, “We’ve had eight years of a bully” and that those days were finally coming to an end.

For his part, Mr. Thompson remained hopeful, despite the fact that the numbers seemed to suggest the race had ended.

“We’re gonna win this race to make room for every one of those dreams,” he said. “We started this fight more than four years ago when a small group of politicians conspired to take your voice away. And let Mike Bloomberg buy a third term. Some people helped him and others took a pass on fighting against him. And lots of people said nothing could be done about it anyway. But not you, not us, not then, not here, and not now.”

Still, Bronx Borough President Ruben Diaz Jr., another supporter, added that while he was “optimistic” Mr. Thompson would force a runoff, any Democratic candidate would do a better job for his borough than the current mayor.

“They will all be better than any Republican,” said Mr. Diaz, noting a Democrat has not won Gracie Mansion since 1989. 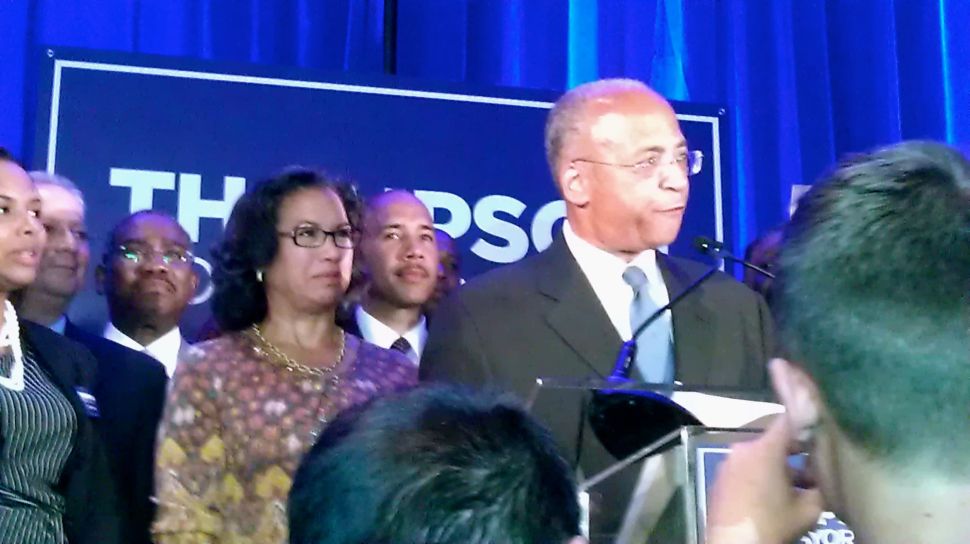