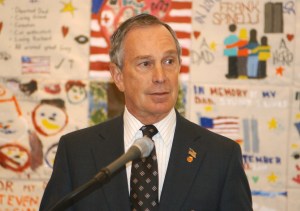 Bloomberg reports that New York City Mayor Michael Bloomberg will chair the Serpentine Gallery in London, the exhibition space run by Julia Peyton-Jones and Hans Ulrich Obstrist. The news, which was announced at a Serpentine dinner on Sept. 24, suggests, as has been rumored, that Mayor Bloomberg plans to spend a fairly significant amount of time in the U.K. after his mayoralty ends Dec. 31.

Mayor Bloomberg had previously served on the board of the Serpentine, and it sounds like he was a pretty good board member, if this excerpt from a 2002 New York magazine article is to be believed (though note that the the Serpentine does not actually deal art, as it suggests):

Julia Peyton-Jones, director of the Serpentine Gallery, an avant-garde art dealer located in the glorious middle of Hyde Park, was intrigued to receive an invitation to a Bloomberg soirée at Sir Terence Conran’s Bluebird restaurant. Curiosity turned into delight when she found herself seated next to the host.

“I found him absolutely hilarious and extremely endearing,” Peyton-Jones says. “He was completely irreverent and talked about the arts in a very straightforward way.”

Flattered by his interest, Peyton-Jones did a most un-English thing: She screwed up her courage and asked him for money directly. The check Bloomberg wrote for £250,000 got him a seat on the Serpentine’s board alongside one of the city’s social lions, Lord Jacob Rothschild. “He missed very few meetings,” says Peyton-Jones. “His dedication was remarkable.”