PATERSON – Democratic challenger Barbara Buono turned to Latino leaders today to help her make the case that incumbent Republican Gov. Chris Christie cares for the rich and powerful and not the working class needs of a key voting minority group.

“The governor is trying to make it about his appearance,” said Buono, reflecting on the race, a reference to Christie’s complaint earlier this month about Buono alluding to him “frolicking” on the beach. “No one is talking about his appearance except him.”

Buono said she and Latinos are offended by Christie’s veto of the Democrats’ minimum wage bill, and his cut of the earned income tax credit, which she vowed to restore.

“It’s a great honor to be standing here with Senator Buono,” said Blanco. “She cares and knows our needs.”

Fuentes made the drive up to Paterson from South Jersey for the event.

“Yes, South Jersey is in the house,” he told a gratified Buono, who’s lagging far behind Christie in the polls.

The Christie Campaign swatted back at Buono, citing her party’s refusal to consider his version of working class enrichment bills.

“Barbara Buono and her allies in the Legislature failed working families by walking away from Governor Christie’s compromise proposal to raise the minimum wage and increase the earned income tax credit,” said Christie spokesman Kevin Roberts. “No amount of distortions or revisionist history can paper over the hypocrisy and failure of her choosing to have a political issue in this campaign rather than give relief to working families.”

PolitickerNJ.com asked the leaders about the support for Christie of the Democratic leaders of at least two powerful political machines that depend on Latino voters to get out the vote, namely Essex County’s Joe DiVincenzo and Hudson County’s Brian P. Stack.

“Those leaders are supposed to be representing the people of New Jersey,” said Buono. “They’re embracing his policies of exclusion.”

Chair of the Hispanic Caucus in the Legislature, Pou said those leaders don’t speak for all their constituents – or even their affiliated organizations.

“Some of the folks out there endorsing the governor are figureheads, not whole organizations,” the senator said.

Christie has made a concerted political effort this season to reach out to Latinos, including opening a campaign headquarters in Paterson and landing the endorsement of Martin Perez, head of the Latino Leadership Alliance-PAC. 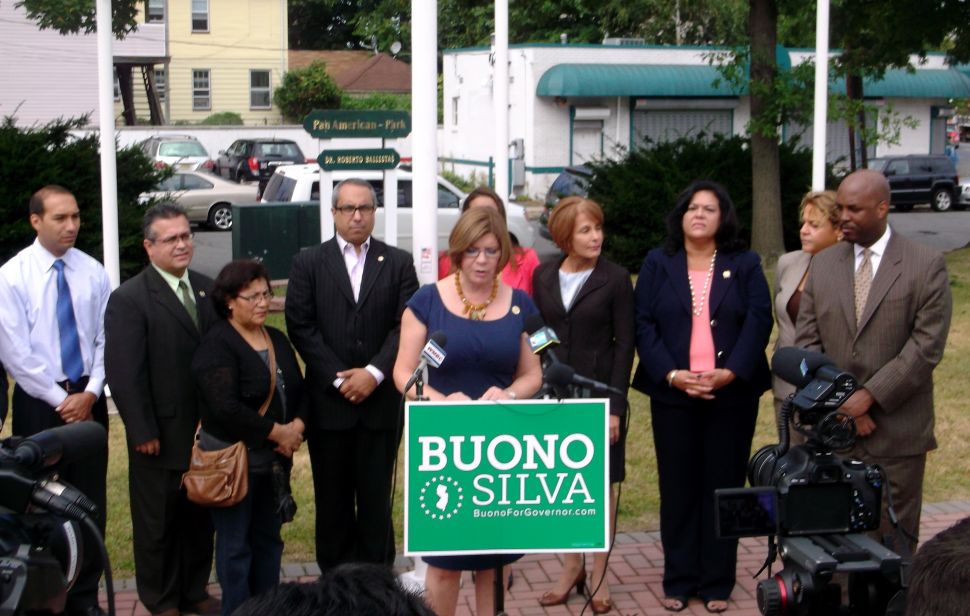