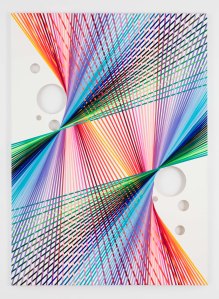 Brazilian artist Caetano de Almeida’s third New York solo show includes an untitled 2013 watercolor that feels like flying. Across a white sheet of paper five feet high by three-and-a-half wide—just the right shape for a door into the sky—spin a loose two-dozen sections of circle. Brisk but not unduly sharp, the hot-pink, highlighter-yellow, orange, purple, blue, gray, turquoise and brown lines are like the singular, self-contained gestures of a modern dancer. They offer no meaning but their color and sweep, but it’s not to make a point—it’s simply because they’re sufficient as they are.

Hidden among the colors are six circular cutouts, hard to notice both because it’s paper mounted on paper and because their tone is so similar to that of the colored lines. They’re just a few more spins to make you dizzy. But in the acrylic on canvas Agudos, Mr. de Almeida’s cutouts are more like the sound hole of a guitar, letting the canvas’s shadow resonate against the wall. Six of them, arranged in a loose oval that slashes down from left to right across the painting’s high middle, divide a vertical pattern of red and blue stripes into six or seven irregular groups. To begin with, the stripes are separated by white spaces of equal width, but they compress around the holes like the strings of an autoharp. At the strings’ most compressed, the white space is squeezed out entirely, creating a violet-purple as your eye fails to separate red and blue. Somehow, this color seems more honestly come by than you’d think: It’s the difference between an effect and a trick.

The cheery, all-in mood remains consistent, but Mr. de Almeida turns his simple building blocks to a wide variety of effects. Irregular wavers in the orange and blue grid of Golden Eye makes for a landscape at once bumpy and flat; two untitled watercolors repeat the icy splatter of the flying circles, but with straight lines; and in the large acrylic Centripeta we see the universe in microcosm as a twisting, polychromatic loom. (Through Oct. 13)