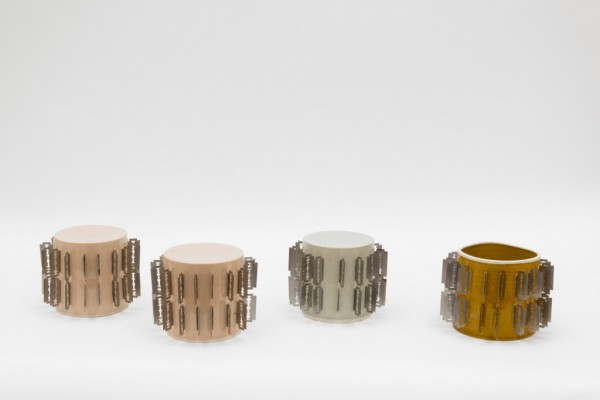 Being an artist these days involves turning oneself (and one’s art) into a brand, an object, a digital file—something to be collected, stockpiled and exchanged. Which is a concern that runs through Carissa Rodriguez’s sharp, multivalent show in the offices of Front Desk Apparatus, a hybrid art advisory, marketing agency, publisher and gallery.

Ms. Rodriguez doesn’t seem particularly irked by this reality. A longtime director at Reena Spaulings Fine Art, a Lower East Side font of artistic talent and branding magic, she’s expertly surveying and surfing art world power dynamics, rather than attacking them directly in her solo gallery debut in New York, which follows an impressive run of sterling group show appearances in the city, and superb-looking outings abroad.

On a standing wire rack in the space’s small gallery, she has deposited copies of three different postcards, each bearing a slightly tawdry, private detective-style photograph of one of her paintings (they’re all identical) hanging in one of three collectors’ homes. They’re free for the taking, inviting visitors to both consider and potentially contribute to the promulgation of her brand.

A fourth postcard has a photograph of a square of fierce Halogen lights, the very ones that are installed on the ceiling around the corner. They light a tiny, empty gallery within the gallery built of drywall and painted Super White—a send-up of the intensely bright, cold light that has proliferated in galleries in recent years and is ideal for digital reproduction.

The rise of the Super White aesthetic is in no small part thanks to the blog Contemporary Art Daily, whose proprietor Forrest Nash has collaborated with Ms. Rodriguez on a project on Front Desk Apparatus’s website, a script-generated image feed that serves up mostly photographs of attractive model types, luscious-looking cakes, celebs (including Hillary Clinton) eating pizza and portraits of a baby-faced man. The subtext may be that, in an art world as large (and flush) as today’s, artists risk becoming nothing more than producers of comfortable visuals for self-selecting consumer groups—an unpleasant digital feedback loop that risks destroying Mike Kelley’s old belief that art is “simply about fucking this up for the pure pleasure of fucking them up.”

The title of Ms. Rodriguez’s show, taken from the 1967 Eric Rohmer film, may provide a hint as to how artists can cope in this environment. (It definitely provides a model for a series of scary, funny ceramic case paint cans lined with razors that she has copied from it.) In the movie, a woman unapologetically collects male lovers. Here, Ms. Rodriguez adopts the role of the vicious collector herself, using the tropes of institutional critique—architectural intervention (those Michael Asher-esque walls) and incisive installation shots (the Louise Lawler-esque postcards)—to assemble a chilling indictment of some of contemporary art’s prevailing banalities.

In a mantelpiece in the gallery, she has embedded a Cartier ring. As you admire its elegance, perhaps even lusting after it, you may find darker thoughts about aesthetics, and power, sneaking up on you. (Through Oct. 7)