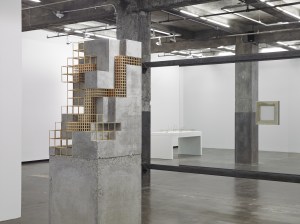 Carol Bove stops short. A systematic thought process can knit itself together into a stable, static pattern, like Harry Smith’s Design for Qor Corporation, an acrylic on cardboard cruciform Celtic knot; distend outward in an infinite loop, like much of the beautifully geometrical, dangerously mystical ephemera produced in mid-century by Mr. Smith, his friends Lionel and Joanne Ziprin, and assorted Kabbalists, and curated into a small parallel exhibition by Ms. Bove and Philip Smith; or collapse and dissolve like ocean foam. But in I-beam Sculpture, the first piece meeting the viewer in “RA, or Why is an orange like a bell?” Ms. Bove arrests the process at the last possible moment of suggestive ambiguity. Eight purplish lengths of I-beam faintly marked with scaly orange rust are bolted together into an inconclusive intersection. Two shorter sections are fastened together lengthwise, parallel to the floor, with symmetrical cutouts at either end. Facing the door is a cross-shaped gap; on the far side, pointing to the large pane of glass, framed between two more I-beams and two of the gallery’s columns, on which Mr. Smith’s painting is mounted, is a cross.

The result feels like a tactic of evasion as much as a desire for flight. But another piece, Peel’s foe, not a set animal, laminates a tone of sleep, lifts off and makes exhilarating loops between its narrow boundaries. Two cast concrete blocks, each 24 x 24 x 42 inches, are stacked up the long way to produce a 7-foot gray monolith with three vertebra-like round bumps on the back of the upper half. As in the Kabbalah’s vision of creation, Ms. Bove starts with perfect wholeness and reaches down toward the unclean only afterward—water stains, cracks and open bubbles like acne mark the concrete’s surface, and the upper or heavenly block is partially replaced by an incomplete and irregular series of hollow brass cubes and boxes. It’s a fantasy of vision as dissolution or the body as a construct of the mind, but what it really shows is the creativity of analysis: However modular the concrete’s measurements, and even if the whole thing existed in Ms. Bove’s mind before she built the cast, the brass cubes weren’t there till she put them there. 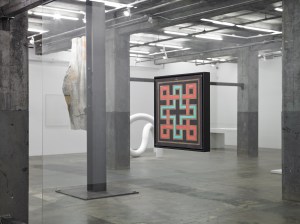 Flora’s Garden II is founded on a shorter concrete block with a single round hole in the center of each vertical face. Around one corner of the block rises a roughly square steel frame; around the upper corner of the frame is a floating island of more foamy brass boxes; and from the corner of this island— where a vandal at the 2012 exhibition “documenta13” in Kassel, Germany, broke it open like a crown chakra— comes everything else. More than a dozen other pulled-off, opened and partially deformed brass boxes are laid out on a white table with a surface as matte as drawing paper, casting complex double and triple shadows and demonstrating how to reduce three dimensions to two without loss. The problem with systems that can go on forever is they never feel finished; but these boxes find wholeness by being uniquely and deliberately incomplete.

In this context, the two white, powder-coated sculptures, both giant-size steel cylinders bent into confidently light-hearted squiggles, descend as triumphantly as Ezekiel’s chariot. Solar Feminine is a single loop, a half-uncoiled spring, with the organic integrity of an irreducible gesture; its glossy white surface glows with sheer health in the otherwise shadowy room. Hieroglyph, a bent-back double curve like a piece picked out of a Tamil letter, is as deceptively transparent as an eternally unchanging divine truth: Simple enough to take in in a single glance, it looks different from every view. (Through Oct. 19)