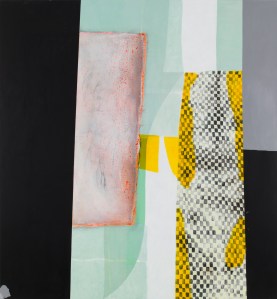 Charline von Heyl paints with impeccable balance: consistency of tone, harmonious symmetry of color and weight, and a reverence for flatness create a kind of melodramatic opacity, a performance whose function is to conceal what it seems to reveal.

In Night Doctor, for example, a sharp-edged white hand with black fingers, like a raccoon’s or a cartoon bear’s, reaches in to tap a world of gauzy white, pinks both dirty and rosy, and dripping green. Your eyes slide over the surface like ice. But a fuzzy little gap on the ring finger that lets through a bit of background pink functions as a small window into the suffering and work it takes to erase so effectively all traces of suffering and work.

A similar hint can be found in an exposed bit of rose on the side of the darker, more purple Skull, or in the swatch of mouse-gray on the lower lefthand corner of Moky, otherwise satiny black. Tipped vertical lines between shifting cut planes draw you discreetly, between heavy nocturnal curtains, into an elegant parade of white pillars, pale green shadows, neon orange splatters, golden yellow lights, and sooty checkmarks in the center of Moky—but you would be trapped there in an endless genteel runaround if it weren’t for that bit of mousy gray. 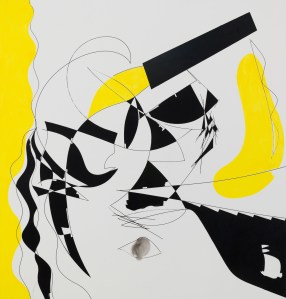 The safety-tape yellow ground of Bois-Tu de la Bière? is given stature and richness by a few translucent red drips. Like blood that has been nearly scrubbed away, the force of their allusion only increases with its faintness. A scratchy black line follows the edges of the canvas around half a dozen times, bounding up once to make a brief figure in the center, in a ritual performance of the basic, beautiful trick that glitters magically around all the gallery walls: drawing a frame around nothing makes it something. (Through Oct. 5)