Senator Chuck Schumer made sure his endorsement event for Bill de Blasio this afternoon undermined the messaging of his Republican rival in the mayor’s race, Joe Lhota.

“I’ve spent 30 years, 36 years, trying to get crime reduced in this city and I have every confidence that Bill de Blasio will do everything he can and will do it successfully to keep crime down in New York,” said Mr. Schumer, standing next to Mr. de Blasio on the steps of Brooklyn’s Borough Hall.

“We know that a safe city is very important to all New Yorker, wherever they live, wherever they are, whatever their income. There are many, many ways to do it. He’ll study it. He will work at it. And he will keep our city the safe city that it is today,” the senior senator assured.

Both Mr. de Blasio and Mr. Lhota have made police issues a cornerstone of their campaigns. Mr. de Blasio has been an especially harsh critic of Police Commissioner Ray Kelly, arguing the department needs new leadership and celebrating efforts to curb the controversial stop-and-frisk police tactic. But Mr. Lhota, siding with Mr. Kelly, says the measures will handcuff the department, spurring a return to the bad old days when New York logged several thousand murders a year.

But Mr. de Blasio today confirmed that he had recently met with Mr. Kelly and other police brass, and described the meeting as “extremely helpful.”

“Now it’s well-known I have some differences with the commissioner in some areas, but I agree with him on core notions about fighting terrorism,” he said when asked about the meeting. “I agree with him that New York City has to protect its own interests …. The threat is intense and ongoing and will be ongoing for many years to come.”

Mr. Schumer once more stepped in to offer his assurance, telling reporters: “I again believe that he and the federal authorities will work extremely well together to prevent terrorism.”

Overall, the event was a lovefest between the two Brooklyn pols, with Mr. Schumer praising the mayoral candidate as “a quintessential New Yorker” and Mr. de Blasio hailing the senator as the “ultimate Brooklynite.”

“If you believe as I do that the number one problem facing the country and facing our city and state is that middle class incomes have declined, somebody who’s immersed in those issues, who lives and breathes those issues, is the best choice for mayor,” Mr. Schumer said.

Mr. de Blasio is far ahead in the polls, with six weeks to go before Election Day. 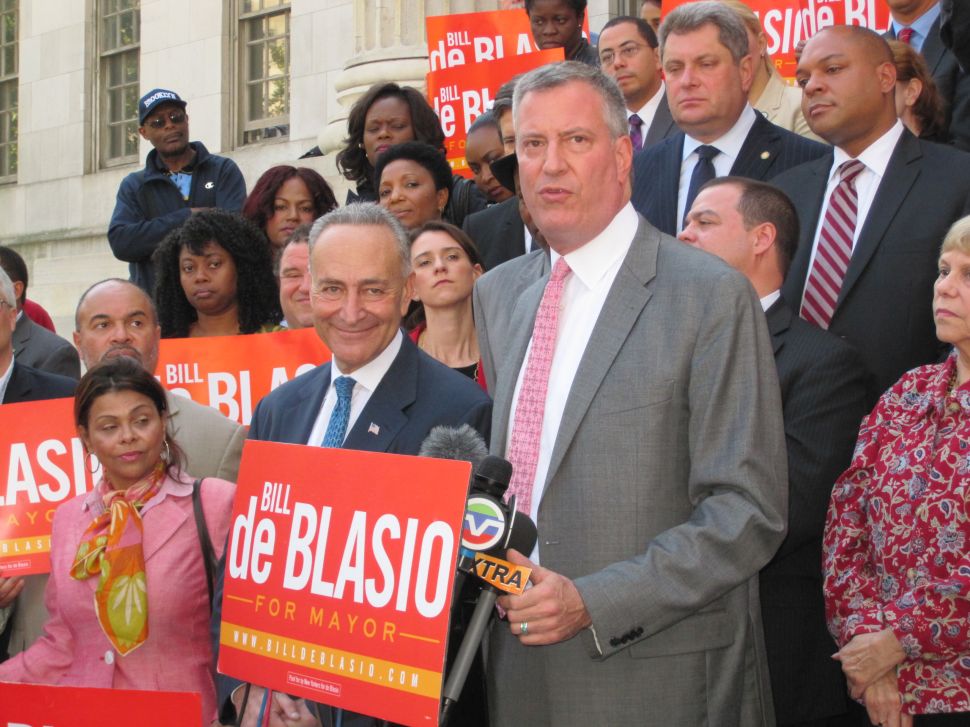