Yesterday evening, in the muggy dregs of a 90-plus-degree September day, we made our way to Lincoln Center, to sit in a room made over-warm with the presence of too many bodies and watch gaunt, stern-looking young women sulk down a runway wearing pieces intended to set consumers’ hearts aflutter in Spring/Summer 2014.

It was an odd coupling of weather and habiliment: the attire was, for once, timed not only to the industry’s sales cycle, but also to the atmospheric conditions outside. And yet, as we sat in our sweat-dampened silk, the heart of the industry beating all around us (or was it just the beat of the overloud music? and did it make any difference?), what struck us as most unusual was that the fashion world bothered with such an absurdly outdated concept as seasonal collections at all.

The collection in question—Osklen’s Spring/Summer 2015 Rio de Janeiro collection—featured lots of loose, airy, pajama-like crepe separates with cleverly-cut backs, calling to mind a Brazilian socialite who devotes much time and consideration to leisure activities. She might wear the items during the Rio de Janeiro summers, which are tropical and quite hot, were she not almost certainly taking refuge in a cooler clime. Or she might wear them in whatever balmy locale she elected to pass winter—after all, the city’s winters, though temperate, are rumored (though not confirmed) to have seen frost at least once.

Are not such rarefied garments designed for those to whom seasons have no real meaning? A globe-trotting elite with the means to go where they wish, to command bluer skies and warmer breezes by stepping onto a plane? There is a reason, after all, that one keeps multiple residences.

What impeccably-attired master or mistress of the universe would condescend to pass the winter in the cold or the summer in the heat? And who would consent to spend unpleasant weather in anything other than climate controlled splendor? Nor are the fall/spring distinctions particularly meaningful now that the global elite, the super consumers to whom such designs aim to appeal, are sprinkled around the world, in places where the seasonal shifts of New York and Paris do not much apply.

Why shouldn’t designers make whatever sort of garments they want whenever they feel like making them, given that they will be worn by people who can disregard such practicalities? Why not simply abandon this final, strangely practical hang-up of the fashion world?

Of course, as it might sometimes seem like one big thought experiment, fashion week is also a blatantly practical affair—an industry trade show in which buyers decide what finery should fill their stores. But stores have long since divorced their wares from the actual season. New items, if bought, must be relegated to the back of a closet until the weather turns, at which point they all go on sale.

Even mass market retailers like  J. Crew, whose largely middle-class customers are forced to dress in accordance with the forecast, have started to move away from such arbitrary distinctions—releasing new pieces throughout the year and selling bathing suits (at least online) through the winter.

True, even the very wealthy will require coats as well as bathing suits, scarves as well as shorts, boots as well as sandals. They will visit ski resorts and beach resorts; it’s just that their clothing needs do not necessarily map onto the seasons of wherever they keep their primary residence.

Back in the day clothes were constrained by circumstance, by time and place, by the difficulty of travel, the need to consider the chill a woman would feel as she moved away from the fireplace’s hearth. But now we have airplanes and yachts and climate control. To be truly wealthy is to be freed from seasonal imperatives.

In this way actual seasonal attire becomes akin to Aspen resort wear—like winter boots covered in white fur, they are nothing so much as kitsch, a mockery of function, a form of sartorial slumming it.

Actual garb to protect from the cruel and unalterable elements, to guard against frostbite or heatstroke? Those are for the masses, those whose and sensibilities are limited for want of time and money.

And for those who would argue that Fashion Week is really about the knock-offs that will consumed by the middle class, isn’t the point of fashion to be aspirational? To reject not only the notion that we should live at the mercy of the elements, but at the mercy of any practical considerations whatsoever? After all, what practical-minded woman would wear a plastic sheath covered with palm trees over a silk dress like the one that debuted at the Osklen show?

Certainly, there is a frisson that comes with a change of season, one that can easily be converted to consumerist impulses, but is there not a greater excitement in scuttling tradition, and once and for all breaking with the tyranny of the seasonal collection? 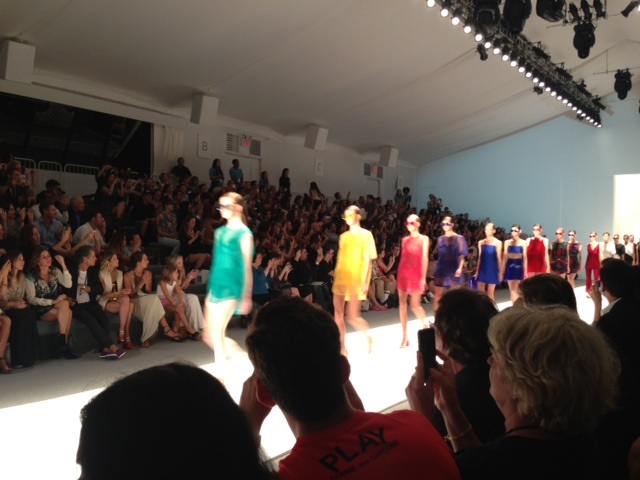