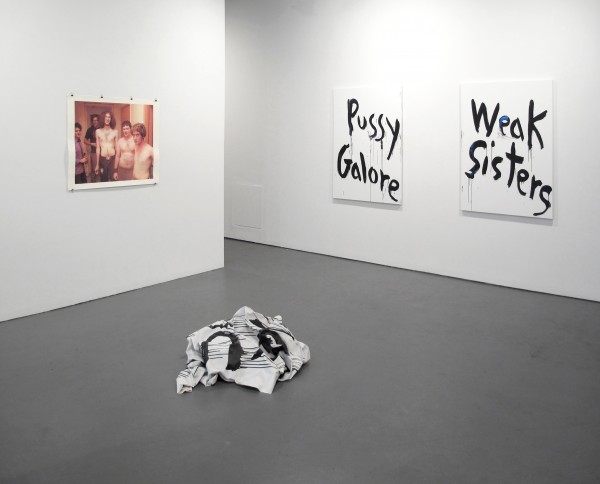 Kim Gordon, the longtime bassist for Sonic Youth, is a brilliant musician, a captivating performer, a clever critic and, judging by her current show at White Columns, a fairly uninteresting visual artist.

Named for a project that Ms. Gordon began in 1980 that involves proposing alterations to various spaces (“using art to deconstruct design … and design to deconstruct art,” as she puts it), the show is billed as a survey of her nearly four-decade-long art career but is composed primarily of pieces from the past 10 years that traffic in the aughts’ most tired art clichés, like paintings using found objects as supports, bland commentary on postwar architecture and maybe-ironic expressionist marks. 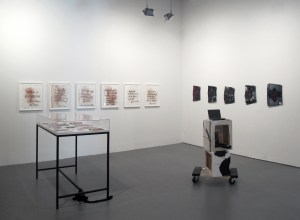 Installation view with ‘Twitter’ and ‘Boyfriend’ paintings in the background. (Courtesy White Columns)

To wit, there are short denim skirts slathered with a few streaks and splashes of paint (the 2012 “Boyfriend” series), faux watercolors of banal L.A. architecture that are actually printed and—probably her most well-known works—fun, if trivial, paintings on which she messily writes, Merlin Carpenter-style, the names of noise bands (Pussy Galore, Weak Sisters) and art dealers (Barbara Gladstone, Larry Gagosian) with black paint on white canvas. One, crumbled on the ground, apparently bears the name of her now-broken-up band. Not exactly subtle.

An artist I was visiting recently castigated a peer’s work as “post-Kim Gordon art,” which is to say it was schooled in Ms. Gordon’s lazy aesthetics, coasting on a bare minimum of material and effort and a not-inconsiderable amount of attitude. (A beaten-up, punkish look helps; artists like Nate Lowman, Lucien Smith and most of the Still House crew come to mind.) “Isn’t that enough?” this kind of art asks, annoyed.

To that end, some of the more painful pieces in Ms. Gordon’s show include rectangular slices of soundproofing foam served up as paintings (the readymade painting needs to be banned for a while) and new scrawls, on paper, that feature tweets from various art and music celebs: “All animals have the same parts,” by Pamela Anderson, “retweeted by Richard Prince.” Ostensibly efforts to reframe these utterances, these pieces would be laughed out of most New York galleries if they were by anyone else. 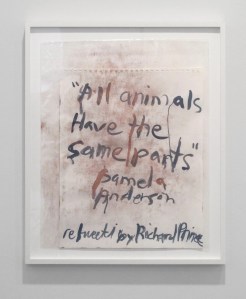 But there are exciting moments here and there, like videos and a slide projection of Ms. Gordon performing with Jutta Koether, a rollicking 1995 film (directed by Phil Morrison) for her still-cool ’90s X-Girl clothing line and vitrines and posters showcasing some of her writings. (Sternberg Press has an anthology on the way.) Meanwhile, she has a beautiful, spacey psych-noise album out with her new band, Body/Head. Buy the album and, unless you’re a completist, skip the show. (Through Oct. 19)