Hardware has been ubiquitous on clothing and accessories for the past year or so, but frankly, it feels like eons. Still, Diesel’s luxury label made the case for continuing to beat this particular horse when they unveiled their SS 2014 collection at Grand Central Terminal’s Vanderbilt Hall.

The black, white, slate and muted pink garments on display were covered in more hardware than a $5.99 iPhone case, but maybe we’re just bitter because we didn’t get to watch the show firsthand. It turned out The Observer‘s heavy black cardstock ticket (complete with giant silver rivet because #hardware) was standing-room only. Furthermore, it turned out standing-room at this particular show meant standing in the train station watching the bold-faced names scurry past us and into Vandy Hall proper, then being shut out by security guards. It was like commuting from Connecticut, but with way hotter people. Some of the VIPs in attendance included Carine Roitfeld, sporting a structured white–was it linen?–jacket and skirt; Bryanboy; the extremely tan Jay Manuel; and last of all Anna Dello Russo, who scurried in just before the beefy enforcers announced no one in the standing-room or press sections would be allowed in. Ms. Dello Russo, by the way, rocked a floral baby-doll dress with a big Peter Pan collar and some combat boots.

Another exciting personage in attendance was Kanye West, who must have snuck in and out the back rather than stroll through Grand Central’s bustling concourse (can’t imagine why). He wore white too, as well as a giant gold chain, prompting us to wonder if he and Ms. Roitfeld got ready together or at the very least exchanged “omg what r u gonna wear” texts.

Mr. West, we decided, was likely surveying the goods on behalf of boo Kim Kardashian. Studded neutrals are certainly in her wheelhouse and as the rapper himself once tweeted, “I have to dress Kim everyday so she doesn’t embarrass me.” Ah, romance. Between conjuring Kanye-Kim-Carine fanfic and being sad that we couldn’t enter the show, we ruminated on some of the trends in which attendees were participating. There were still a few holdouts sporting leather booties that were heavy around the ankle and exposed only the most hideous and veiny portion of the foot, we noticed. There were a fair half-dozen bedazzled, graphic and otherwise jazzy sweaters and sweatshirts, which thrilled us to the point of elation, because if there’s one thing better than being comfortable it’s being comfortable and still getting people to look at you.

Also, cotton candy hair is still happening even at these top tiers of the fashion world, which pleased us because we just found out there’s a way to do it temporarily. And for the more mature (less fun) hair enthusiasts, lots of ladies had inky jet-black locks with structural Vidal Sassoon-like bangs. Also a do: being a seven-foot-tall, lithe Scandinavian woman with a white bowl cut and a blasé look on her face. Good luck with that one.

After 10 minutes, the bassline emanating from behind the curtains subsided and the show ended. The cops tried to rearrange us standing-room schmucks so that attendees would be free to peacock back out of Vandy Hall, pretending not to notice all of the flashbulbs. One policeman was heard to remark to his colleague, “This fashion shit,” with an unmistakably SMDH tone in his voice.

We checked Instagram, Facebook and Twitter for glimpses at the clothes, noting that one pair of pants contained enough shiny silver discs to come with a built-in pickup line. You know the one, “Is there are mirror in your pocket? Because I can see myself in your pants.” Below, a smattering of social media activity that stemmed from BDG SS 2014:

The show as seen by Coco Rocha and Kanye West:

Watching the Diesel Black Gold show from my perspective and Kanye's. As filmed by @JamesEdwardConran. #DBGshow

Ms. Rocha’s shot of the iconic Grand Central Station before the show started. A follower of hers commented, perplexed, “What do the people do who need to get places? That’s crazy.”

Only @DieselBlackGold could shut down Grand Central Terminal for a show. #DBGshow #NYFW

Chiara Ferragni‘s video of the show… 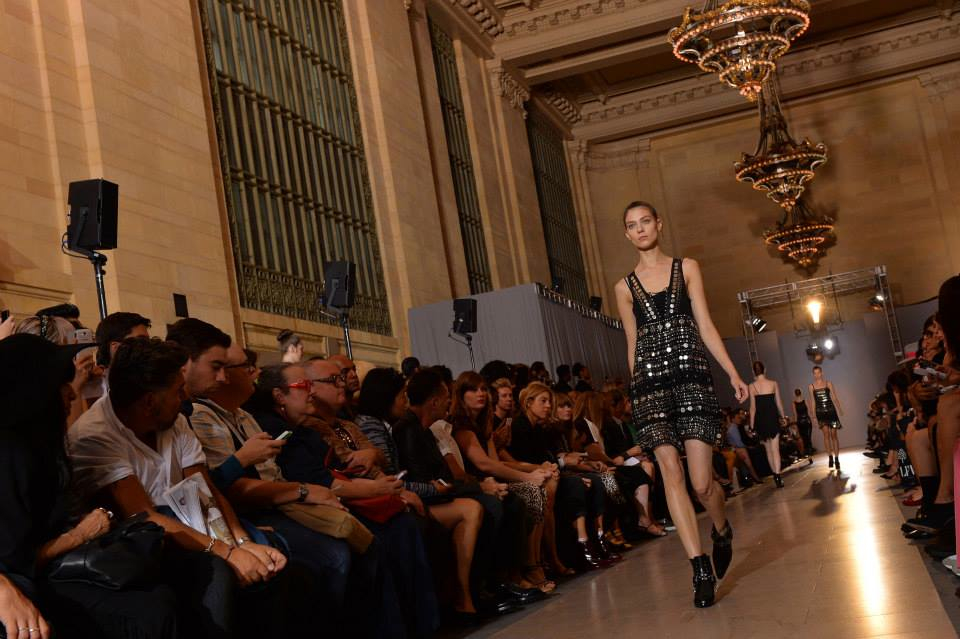