When Alex Drexler, son of retail macher Millard “Mickey” Drexler, launched his new clothing venture last month, he wasn’t the first entrepreneur to start a line with his father’s blessing.

Under Mr. Drexler, J. Crew has become an incubator for fashion self-starters.

Chris Benz got his start at J. Crew, and now his colorful, exuberant designs (and personality) are a favorite of everyone from Kim Kardashian to Michelle Obama.

Emily Sugihara, creator of those ubiquitous Baggu reusable totes everyone has at least one of, did her time in the J. Crew salt mines as well. So Erica Bell and Katie Finnegan, the gals behind Hukkster.com, which notifies you when your favorite products go on sale online and boasts the Winklevoss twins as investors. They met when both were working on the business side of the factory division. And so on.

“If you have a great idea, you can bring it to the table,” said Tracey Van Voorhis, who did a three-year stint as Mr. Drexler’s assistant before launching a line of chic head coverings called Robin Hoods. “In that way, J. Crew is very entrepreneurial, because you can see something from your idea conception actually translate to being in stores or online.”

That’s not to say that everyone who works at J. Crew has designs on leaving. On the contrary, neon peach Kool-Aid seems to flow from the faucets at a company known among headhunters for breeding lifers who are notoriously hard to extract. The company’s famed president and executive creative director, Jenna Lyons, has spent her career at the company, working her way up from assistant.

It takes ambition and moxie just to get in the door, the same qualities required to brave the chilly waters at a fashion start-up. Those who make the cut discover a freewheeling internal culture—“There’s Mickey riding around on his vintage bike!”—that appeals to the would-be Chris Benzes of the fashion world.

In many ways, J. Crew itself is the eternal start-up. Since Mr. Drexler, the former Gap CEO, took the reins a decade ago, the retailer has mastered the art of rendering mall items to feel like boutique finds (even if you and all of your friends end up with the same jewel-encrusted cardigan). The idea of ordering your wedding dress online? Popularized here. The skinny men’s suits that have become office uniforms everywhere? Ditto. Less successful were J. Crew’s short-lived fur and activewear lines, but those missteps look tiny through the lenses of J. Crew’s new Lyons-inspired eyeglass frames.

Mr. Hamilton, who worked on the 2006 launch of Madewell, the denim-centric, less-expensive sister to J. Crew, said that effort was almost like launching a new line altogether. “Doing Madewell was like a start-up. Even when you’re under the umbrella of a big corporation, you still have a small budget,” he said. “It taught me how to be resourceful. It definitely taught me how to do something on my own.”
J. CREW IS ALSO A COMPANY that doesn’t have a problem letting its stars shine, starting with Ms. Lyons and menswear director Frank Muytjens, possibly the only mass retail creatives who are not only household names but style-world luminaries as well. (Pop quiz: Can you name the creative heads of Banana Republic or The Gap?) Under Mr. Drexler, even the lowest ranks are encouraged to spread their wings, former employees said.

Ms. Van Voorhis recounted a time when the company was building its third-party business and asked his employees for other brands they loved.

“One of the women on the men’s merchant team, Tracy Rosenbaum Georgiou, was an assistant and put together a list of brands she thought would be a great addition to J. Crew and sent it to Mickey,” she recalled. “He absolutely loved it and basically said to her, ‘There are a bunch of merchants going on a trip tomorrow to secure these brand partnerships, and I think you should go.’

“So this girl, who is essentially an unknown men’s assistant merchant, put together this really kick-ass list and the next day booked a flight to meet with a bunch of these brands. She later became the women’s branded buyer.”

Young talents angle for jobs at the company for precisely such opportunities. “As soon as I started there, every friend I knew—and plenty of other people—came out of the woodwork to try to get an in at J. Crew,” Ms. Van Voorhis said.

It’s not easy to land employment at 770, as the corporate offices are called (after their Broadway address). “If you had worked as a bartender or a waitress, you would probably have a better chance of getting hired,” Ms. Van Voorhis said. Mr. Drexler “was never too interested in people that were entitled in any way or spoiled.” (Being attractive seems to help too: “Everyone here is extremely well-dressed and goodlooking,” said an employee. “It’s striking.”)

ADMISSION TO J. Crew U begins with the interview, which frequently involves Mr. Drexler himself. “I’ve seen Mickey interview everyone from a starting position to a director or vice president,” said Lisa “Lele” Sadoughi, the former head of the J. Crew accessories department, whose eponymous line of crystal-and-stone jewelry debuted to wide acclaim in the fashion press in 2011. (At least one grilling occurred in the backseat of Mr. Drexler’s car on the way out of town—he gave the young woman cab fare to get back to the office before crossing the bridge.)

Ms. Van Voorhis got her position after winning a bet with the boss. The two disagreed on the opening date of Uniqlo’s Soho outpost. Mr. Drexler immediately got on his famous office-wide intercom (one thing he had installed when he took over the company) asking anyone that knew the exact debut of the store to ring him. The applicant bet him that if she were correct she would get the job. “I don’t know what possessed me to be so brazen,” she said. “But someone called and confirmed the date I said was right, so he wrote on a little piece of paper, then passed it to me. It read, “You won.” And I said, “O.K., I’ll give my notice.”

Getting hired on a bet is a sharp departure from the regimented processes that can characterize the H.R. gauntlet elsewhere in fashion retail. “When I started at The Gap, I was in its very formal retail management department, and there were nine months of intensive training,” said Ms. Bell, who co-founded Hukkster.com after leaving J. Crew, said. “That’s very much in stark contrast to J. Crew, where we really learned on the fly. It’s very sink or swim, which is an important and special opportunity, especially for young college graduates, and one you can’t really have at any other large corporation.”

Mr. Drexler also encourages employees to suggest ideas during his semi-regular open office hours or in response to an intercom call. Open-plan offices encourage cross-pollination, all the better to keep the ideas  flowing. Though a jewelry designer, Ms. Sadoughi was seated next to the shoe and handbag designers. “You could be working on a piece and someone would walk by and say, ‘That could be great for a shoe buckle,’” she said.

Mr. Drexler is obsessed with real-world feedback and insists his team members riff with one another as well. “Every piece of jewelry we created at J. Crew would be passed around to other employees, not just in the design department, but in sales and production, too,” said Ms. Sadoughi. “It was a good mixed demographic of who we were actually selling to.”

All of these practices foster an entrepreneurial working style that makes J. Crew employees viewed as hot hires by other companies. Luxury headhunter Laurent Guerrier said that compared to candidates from competitors, a J. Crew staffer would have an edge. “The accomplishments in positioning the brand clearly in the last five years, moving gradually to a more premium label, working on the customer experience at the retail level and on merchandising make me more inclined to go for a J. Crew profile—on paper,” he said.

Beyond a line on their résumés, many graduates of J. Crew U get lifetime assistance from the big boss, whose legendary communication skills seem to extend to keeping in touch with everyone who has ever drawn a paycheck from the company (though not so much to newspaper reporters—he declined to be interviewed for this piece). Ms. Van Voorhis is planning to have coffee with Mr. Drexler in the coming weeks to update him on Robin Hoods, while Mr. Snyder said the two are “still very connected. I talk to him about once a month.”

One thing that doesn’t come with alumni status is a steady paycheck. “I had to learn bootstrapping the hard way,” Ms. Sugihara said. “We self-funded Baggu, so in the early days we were definitely constrained by cash and always looking for new ways to do things.”

But even when challenges arise, the fashion business needn’t be a slog. That, in some ways, is the real takeaway from the J. Crew employee handbook. “We knew we had to be on our toes, but he had so much fun with it,” said Ms. Bell of Hukkster. “That’s what inspires us now as business owners.” 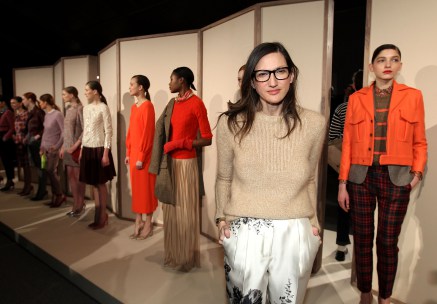