As it begins, so it ends.

Former Gov. Eliot Spitzer has shelled out hundreds of thousands of dollars on sophisticated Obama campaign-style micro-targeting and get-out-the-vote efforts, hiring a small army of staffers instead of exclusively relying on volunteers, to boost turnout in tomorrow’s polls.

According to city Campaign Finance Board records, Mr. Spitzer has spent just over $300,000 on get-out-the-vote efforts over the past five days.

That’s even more than he spent during the frantic petitioning blitz to get on the ballot after he first entered the race.

The total includes more than $100,000 paid to Michael Nieves, a long-time Bronx political operative, and $95,000 to Time for Change Consulting, described by the New York Post this weekend as a “shadowy group with ties to corrupt former Brooklyn Democratic Party boss Clarence Norman.”  (The amount comes in addition to the $70,000 reported by the Post.)

Mr. Spitzer is locked in what polls say is a neck-and-neck battle against Manhattan Borough President Scott Stringer to become the city’s next comptroller. But while the heavy lifting for Mr. Stringer’s get-out-the-vote efforts will be largely powered by his many backers, including nearly ever labor union in the city, local Democratic clubs and local party organizations, Mr. Spitzer must organize on his own.

To augments its efforts, the campaign has hired HaystaqDNA, a company that was founded by the team that created President Barack Obama’s 2008 micro-targeting models. According to one source, the group has created a “sophisticated modeling and micro-targeting program” to help the campaign identify exactly who its voters are.

That model, the source said, will be employed along with traditional GOTV efforts, which already include 100,000 phone calls placed last week and a canvassing presence at 125 subway stations.

Mr. Spitzer’s campaign spokesman Hari Sevugan did not respond to questions about how much the canvassers were being paid but said that without the backing of the traditional party machine, the campaign has little choice.

“While we don’t have the resources of the establishment, we do have the support of the people who want an independent voice in the comptroller’s office,” he said in a statement. “We can’t use brute force like those with machine backing, so we have to be more nimble and strategic. But, we’re going to leave no stone unturned to reach every voter and get them to the polls.” 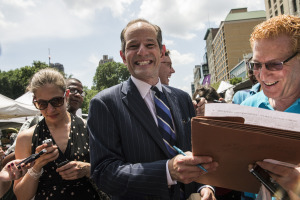