If you could eat Facebook, what would it taste like? We always thought it would be a mix of the saccharine highs of getting 20 likes on your latest selfie and the putrid sting of FOMO, with the depressing aftertaste of being friended by your barren aunt whose profile pic is a painting of a cat with angel wings.

But it turns out we were wrong. Here is what Facebook actually tastes like: shitty Eastern European vanilla ice cream with food dye drizzled on top.

In a cynical ploy for attention and money, a pair of Croatian ice cream makers have created a Facebook-flavored dairy dessert. Again: it is simply vanilla ice cream with drippings of blue food coloring.

Valentino Ice Cream Store co-owner Admir Adil was inspired by his 15-year-old daughter’s antisocial ways to create the flavor, PSFK reports. He and his brother, co-owner Ibi Adil, “created their Facebook flavored ice cream by simply mixing blue syrup atop vanilla ice cream and placing a small sign with a Facebook logo on it,” which is pretty freaking bootleg if you ask us.

The sludge will run you a euro a scoop, and “it’s become a hit as many passersby were immediately drawn to Facebook’s trademark logo,” PSFK reports. Do they have copyright laws in Croatia? The brothers aren’t planning on asking Zuck for permission, “but would if the company reached out to them.” We can’t imagine Facebook will be cool with this, so they’d better get started on a vom-green Vine flavor. 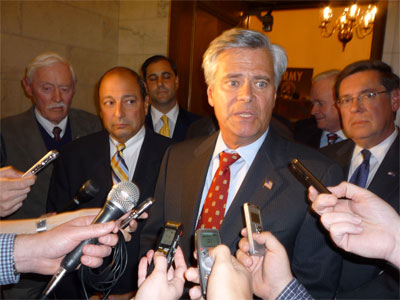