The question for Tuesday–at least according to two new polls–is not whether Bill de Blasio will come in first, but whether he’ll sail through without a runoff or go head-to-head with Bill Thompson.

The city’s public advocate remains far ahead of his mayoral rivals a day before the primary, according to two new polls out last night and this morning. But one shows Mr. Thompson gaining steam.

Quinnipiac University has Mr. de Blasio at 39 percent of the likely primary vote, followed by 25 percent for Mr. Thompson, a former comptroller, and 18 percent for Ms. Quinn, the City Council’s speaker. While Mr. de Blasio’s numbers are down slightly down from the blockbuster 43 percent he scored in the same poll last week, an unusually large number of undecided voters could push Mr. de Blasio over the 40 percent threshold, the pollsters said.

But the poll also shows Mr. Thompson up five points from the 20 percent he got last week. Ms. Quinn’s numbers remained unchanged.

“Remember that there are no undecided voters on Election Day.  If de Blasio picks up just a few of those undecided voters, he’s over the top.  In our last few days of polling, however, we’re seeing the movement to 2009 Democratic nominee William Thompson,” pollster Maurice Carroll explained.

The second survey out last night, from Public Policy Polling, found a similar breakdown, with Mr. de Blasio at 38 percent, Mr. Thompson at 19 percent, and Ms. Quinn back at 13 percent–just four points ahead of former Congressman Anthony Weiner.

That poll found Mr. de Blasio “popular with every segment of the electorate,” and he leads every way one can slice the electorate: gender, ethnicity, age, borough and with liberals, moderates, and conservatives alike.

In one notable finding, among voters who said they approve the job Mayor Michael Bloomberg is doing, Mr. de Blasio–who has cast himself as a leading Bloomberg antagonist– leads Ms. Quinn 37 to 24 percent. Among those who don’t: 39 percent go for Mr. de Blasio; 8 percent for Ms. Quinn.

Still, much of what happens tomorrow will come down to get-out-the-vote operations; and 18 percent of those polled by Quinnipiac said there is still a “good chance” that they will change their minds. 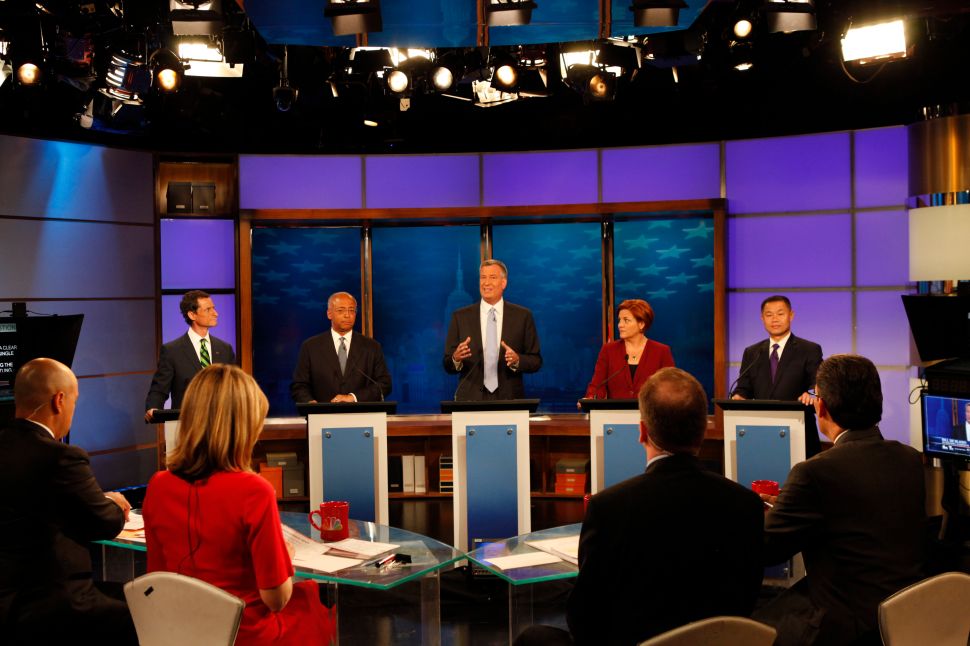