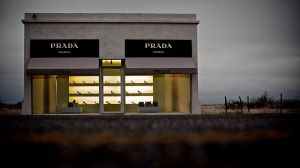 Forces are rallying around Elmgreen & Dragset’s Prada Marfa (2005) installation, which was recently deemed illegal by the Texas Department of Transportation. Though TxDOT has yet to announce definite plans to tear down the structure, a faux Prada boutique in the middle of the Chihuahuan desert, a “Save Prada Marfa” Facebook page has attracted nearly 4,000 likes since it appeared on Sept. 20, and Galerie Nicolai Wallner, which represents Michael Elmgreen and Ingar Dragset, joined the fray today, sending out an e-mail soliciting support for the project.

“The work is a poignant critique of our contemporary consumer culture and holds an important place within contemporary art history,” stated the message. “We kindly ask that you please join the efforts to save Prada Marfa so that we may all enjoy the work for years to come.” The gallery provided links to The Times‘ coverage of the dispute and to the Facebook page, which features additional articles as well as photos from fans documenting their pilgrimages to the work. The page was created by Spencer Bennett, the morning show host on KODM, an Odessa-based soft rock radio station.

The Prada Marfa controversy comes on the heels of the hoopla surrounding the more recent Playboy bunny sculpture designed by Richard Phillips, also located on the side of a highway in the town that Donald Judd helped make famous. The neon sign was classified as illegal due to its lack of an advertising permit, and Playboy was given 45 days to remove the sculpture. That was back in June and the bunny is still standing (the TxDOT order of removal has been extended until late December). So perhaps there’s hope for Prada Marfa.

Update, Oct. 1: Elmgreen & Dragset, the Art Production Fund and Ballroom Marfa have issued statements regarding the installation, all of which are reproduced in full below.

Prada Marfa is an artwork initiated by ourselves and realized in a collaboration with the not-for-profit cultural organizations Art Production Fund and Ballroom Marfa in 2005. It was not a work commissioned by the fashion brand Prada nor had the fashion brand any involvement in the creation of this work. They kindly gave us the permission to use their logo after we asked them, due to the founder Muccia Prada’s personal interest in contemporary art, and she donated shoes and bags, which have never been renewed but stay the same—as a historic display—inside the sculpture. The right definition of advertisement must be based on criteria more accurate than just including any sign which contains a logo. It is advertisement only when a company either commissions someone to make such a sign, pays for its execution or makes a sign themselves in order to promote the company’s products. And this is not the case here since Prada Marfa never had any commercial link to the fashion brand Prada, unlike the Playboy bunny which went up this summer initiated by Playboy itself.

Prada Marfa is firmly positioned within a contemporary understanding of site specific art, but also draws strongly on pop art and land art—two art forms which were conceived and thrived especially in the USA from the 1960s and onwards. Many artists, from Andy Warhol with his famous Campbell soup cans to Andreas Gursky with his grand photographic documentation of retail spaces have appropriated and dealt with the visual language of commercial brands. In an increasingly commercialized world, we see the independent artistic treatment of all visual signs and signifiers as crucial to a better and wider understanding of our day-to-day surroundings, including the influence of corporations.

It comes as a big surprise for us that the Texas Department of Transportation now after eight years may declare this well-known artwork to be illegal and we think it would be a shame for the local community if it disappeared after being there for so long since the work clearly is one of the strong points for the cultural tourism, which is such an important financial factor in this region. However, we are very happy to experience the fantastic support from both art professionals internationally, locals and others, who have even created a Facebook page named “Save Prada Marfa” that after just a short while has received almost 4,000 likes and daily receives plenty of new posts, stories and images from people who once visited this site.

Within our 13 years of producing and presenting important public art, few works have been as eagerly embraced than Prada Marfa by Elmgreen & Dragset. With full integrity, the artists refused for us to ask any corporation, especially Prada, for monetary donations to support the making of this project. It took us over a year of intense fundraising from local and international private patrons to realize this authentic and pure permanent artwork. The family of the late Walter Alton “Slim” Brown, even generously contributed to the project by lending their land. Great public art empowers people and gives them alternate ways to understand the times that we live in; Prada Marfa is a civic gift that has become one of the great worldwide pop icons.

Prada Marfa is a living sculpture, an installation that has taken on a life of its own. In the eight years since its creation, Elmgreen & Dragset’s work has become part of the cultural and physical landscape of Far West Texas. At the same time it has entered into international art history discourse. It’s part of what people think of when they think of Marfa, either as art lovers on a pilgrimage, or as surprised passersby.

It’s also a non-profit project—supported entirely by funds from foundations and individuals—and the antithesis of commercialism. Prada Marfa is an embodiment of the Ballroom Marfa mission to combine innovation and accessibility without compromising on either front. We are encouraging engagement with art. Prada Marfa has been a precursor to other public art projects in Marfa, from temporary installations to our current work creating a community gathering place and performance venue with the Drive-In.