Mailers attacking a longtime Democratic lawmaker in District 27 have a common thread tied to the state’s gubernatorial race.

The GOP-sponsored fliers, which take aim at Sen. Dick Codey, are criticizing the incumbent lawmaker for voting over the course of his career on bills that raise taxes on New Jersey residents, all the while – as one of the mailers states – supporting legislation “to give himself and other politicians a pay raise.”

The strategy of attacking Codey as a tax-happy pol who’s all-too-willing to increase his own pay is not unlike the one being deployed by Gov. Chris Christie’s re-election team, which is airing at least two versions of a television ad that criticizes his opponent for voting in favor of increasing lawmakers’ – and other state officials’ – salaries.

However, like Christie’s campaign, the mailers fail to mention the legislation Codey supported, S2297, was a bill sponsored by a Republican lawmaker and signed into law by a Republican governor.

The mailers portray Codey as a career politician who was elected to the Legislature in 1974 – back when Barbra Streisand topped the charts and Fonzie made his television debut, one flier notes – and went on to take taxpayers “for a ride” over the course of nearly four decades.

“Four decades of Codey,” one mailer reads, “Higher taxes for you, bigger paychecks for him.”

Bankrolled by the New Jersey Republican State Committee, the mailers are targeting Codey as Republican Lee Holtzman works to unseat the lawmaker.

Earlier this month, the Christie campaign began airing ads attacking Democratic gubernatorial nominee Barbara Buono for her record of voting to support tax increases in the Legislature over her career while also supporting giving herself a pay raise.

A spokesman for the lawmaker dismissed the mailers as trivial.

“I don’t think it’s worth a comment,” said a spokesman for Codey, Frank Baraff.

“It’s the same mailer Republicans are mailing to districts all over the state of New Jersey,” he said.

A spokesman for the state Republicans said the mailer campaign is about telling the truth about Codey.

When asked to comment on the fact that the legislation was sponsored by and approved by GOP elected officials, state Republican spokesman Ben Sparks said Codey supported the pay increases for lawmakers and other government officials – including the state’s governor.

“When given the opportunity to raise his pay, Dick Codey voted ‘yea’ not once but twice, and all while voting to raise taxes 170 times,” he said.

Sparks wouldn’t say how much Republicans invested in the mailers. 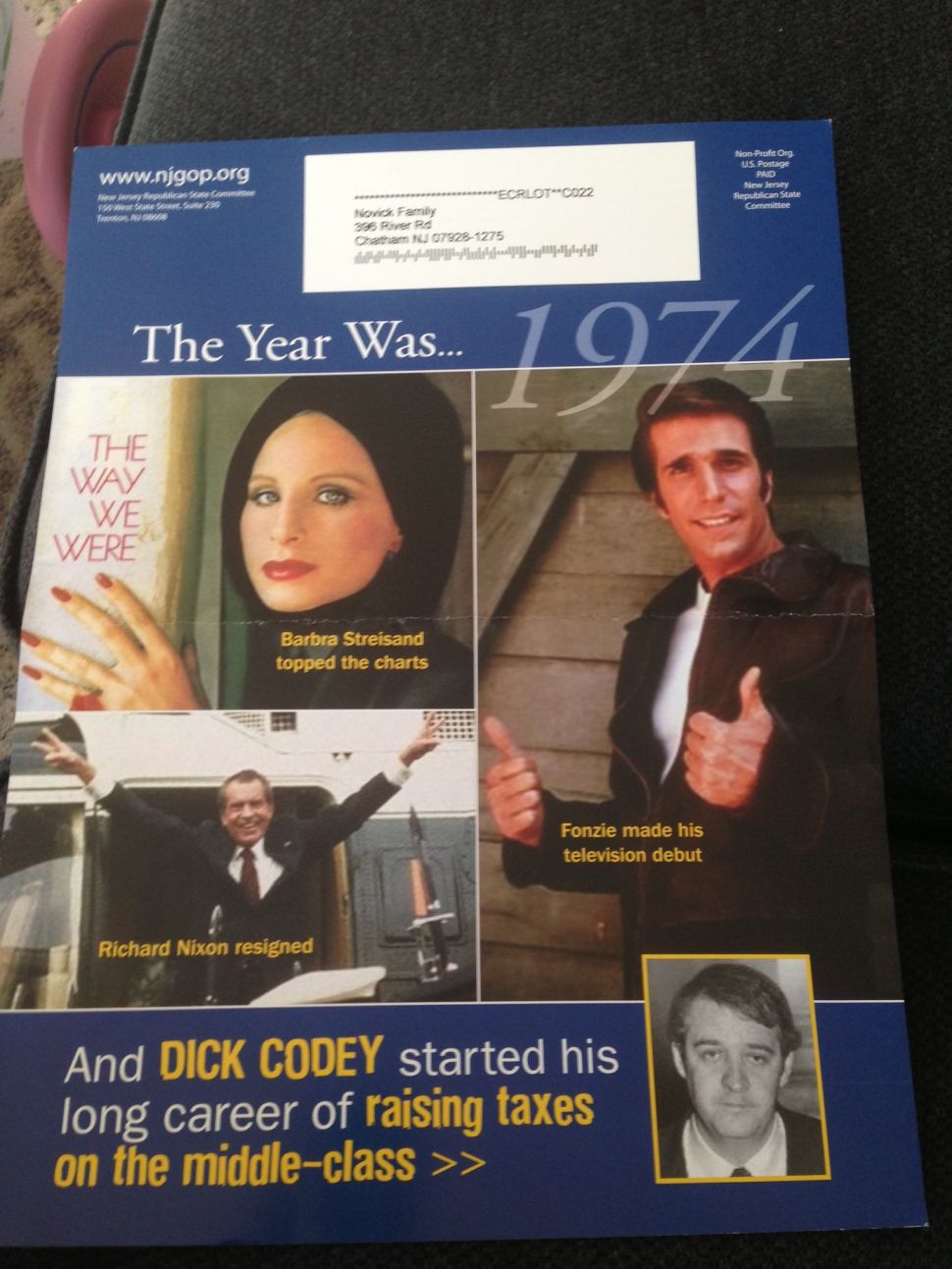