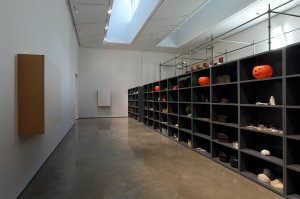 Rumor around Bard has it that the guards at the Center for Curatorial Studies’s Haim Steinbach show find it difficult to keep visitors from pocketing his objects. This has long been a hazard of Mr. Steinbach’s work: The artist, a New Yorker since the 1970s by way of Israel, arranges things on shelves: stylish sneakers, toy robots, teddy bears, cartoon figurines. These kitschy collectibles sit on colorful formica and wooden shelves installed on white gallery walls. In a recent interview in Bomb magazine, he described how some of these objects will disappear from exhibitions: “A kid walks into the gallery and sees a pair of Nike sneakers on the shelf. … A few minutes later, the sneakers are gone!”

Rearranging—and reappropriation—is precisely what Mr. Steinbach has been letting young curators do with his legacy in the past few years, from an interview with Tim Griffin in 2003 to a series of talks on his work at the Lower East Side project space the Artist’s Institute in 2012 to the current CCS solo show, held at Bard’s Hessel Museum of Art and curated by Tom Eccles and Johanna Burton. Mr. Steinbach’s work gained traction in the 1980s, when his sculptures were often grouped with the early conceptual sculpture of Jeff Koons on the one hand, and the reappropriative work of Sherrie Levine on the other. His most iconic shelf arrangements feature Star Wars paraphernalia or gilded boom boxes and were sometimes taken for critiques of capitalism. Mr. Steinbach’s work as seen at Bard is characterized both by less hype and less bite than his initial reception would suggest; his recent reassessment underscores, instead, his relationship with Marcel Duchamp’s Readymades. 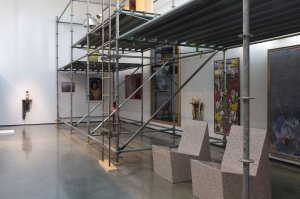 At Bard, Mr. Steinbach has arranged artworks from museum benefactor Marieluise Hessel’s art collection alongside a selection of his own pieces. In his Display #86, 2013, he assembled Robert Morris’s drooping felt blanket, Untitled 1976, Andrea Zittel’s A-Z Fiber Form: White Dress, 2002, a 1978 embroidery piece by Alighiero e Boetti and a pair of stockings from the 1980s by Rosemarie Trockel in an oversize gridded-iron shelving unit. The objects speak to one another on a material level (all are fabric or felt). In another room, an early Bernd and Hilla Becher photograph of nine houses (1989) underscores Mr. Steinbach’s compulsion to collect and group like objects. The walls in the museum are rebuilt in diagonals, and some of them are plastered with decorative, patterned wallpaper, perhaps in a bid to interrupt the easy contemplation of ranged objects silhouetted against bare walls.

The earliest work in the show surprises: It’s Haim Steinbach as a minimalist painter. In the Brown Painting with Bars series, dating from the early 1970s, bare slivers of color are arrayed around a square. A key shows the artist hashing out color’s relationship with language and meaning. Switching to his iconic arrangements of objects on shelves in works like Basics, 1986, in which three brown teddy bears sit on wooden supports, seems like not much of a leap: They might have been titled Brown Bears as Painting.

But unlike flat paint, such objects bring into an artwork a world of social and cultural references. In the catalog accompanying the exhibition, Mr. Steinbach observes, “With my work, the bottom line is that any time you set an object next to another object you’re involved in a communicative social activity.” In the CCS exhibition, he shows us a quiet world in which collecting small objects produces a portrait of the collector. In an age in which our identities are curated online as much as, if not more than, they are in person, his notion of the relationship of language, objects, meaning and selfhood can seem a bit quaint. And yet, still, some of the objects disappear into the pockets of passersby. (Through
Dec. 20)—Maika Pollack