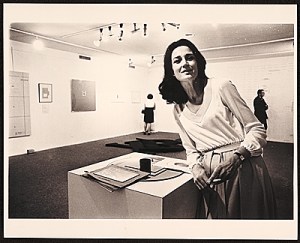 Dwan in 1969. (Courtesy the Archives of American Art, Smithsonian Institution)

As you may have read in Carol Vogel’s column in The New York Times today, the storied art dealer Virginia Dwan is planning to give 250 works she owns to the National Gallery of Art in Washington, D.C. Ms. Dwan showed many of the pioneers of Minimal, Conceptual and Earth Art at her gallery in Los Angeles, then New York, from 1959 to 1971,

“I want the collection to have the largest audience of people possible, not just art world types who have a to-do list,” she told Ms. Vogel. Which is classy.

So who is Virginia Dwan? Back in 2003, Michael Kimmelman, then the chief art critic at The Times, profiled her in an article headlined “The Forgotten Godmother Of Dia’s Artists.” The two of them took the train from the city, where she has continued to live, up to Beacon, N.Y., right before Dia opened its museum there. It’s really a great read. Here’s a bit from the piece, about when she finally decided to shutter the gallery:

‘The closing surprised a lot of people,” she recalls on the train back to the city. ”It had begun to overwhelm me. I lost money from beginning to end, which was never intentional. I didn’t like collectors much. I hated selling, although I knew it was very important. The moment someone asked for a discount, I thought: ‘You’re getting this for $800. You’ve got to be kidding.’ ”Unfortunately, the I.R.S. doesn’t let you lose money endlessly. They can start considering the business a hobby.”

Her resources weren’t exactly unlimited, as she explains in the article. ”I’m not the 3M heiress,” she says. ”I’m one of 18.”

She’s also a godmother of sorts to a line of art dealers that stretches through to present day New York. The art dealer John Weber worked with her beginning in the ’60s, and eventually opened his own gallery in New York, where Jeffrey Deitch served as assistant director in the ’70s. And Deitch, of course, went on to open up his own shop, where younger dealers like Suzanne Geiss and Kathy Grayson cut their teeth. And now they have their own spaces (The Suzanne Geiss Company and The Hole), and a family tree is is growing a few more branches, reaching now from Ms. Dwan to all of their young employees.

In any sense, give the article a read, and head over to Specific Object for more on the Dwan Gallery.