The candidates facing off during a previous debate.

This is it: The last chance for the Democratic mayoral candidates to face off before voters head to the polls a week from today.

And like professional athletes ahead of a big game, each candidate has his or her own way of preparing for the high-stakes showdown. From rocking out to favorite bands to role-playing with aides, here’s what the candidates will be doing ahead of tonight’s final televised debate.

For City Council Speaker Christine Quinn, the former front-runner now fighting for her political life, it’s all about The Boss. She and her wife, Kim Catullo, “blast” Bruce Springsteen music before heading to big debates, according to Ms. Quinn’s spokesman, Mike Morey.

Things are calmer for former Comptroller Bill Thompson. Mr. Thompson likes to prepare for debates by spending time with his family, relaxing and reading through material on his own. It’s “pretty low key,” a spokesman said.

For City Comptroller John Liu, the energizer bunny of the campaign trail, the debate ritual is more complex, with three specific steps, a spokeswoman explained via email. The day of each televised debate, Mr. Liu will, “1) Stop by senior centers to get some advice.” (In fact, he’ll be stopping by four today, in addition to a City Hall rally, a banquet and a commuter meet-and-greet.) Closer to debate time comes, “2) Get energized by the force of volunteers who show up to each debate,” she said. Then: “3) Right before getting on stage, hugs from wife Jenny and son Joey.”

And while former Councilman Sal Albanese won’t be participating in tonight’s debate because he isn’t considered a top contender, his team nonetheless has his routine down pat. “One key to the debates is espresso. Before we leave for any debate, we map out the nearest spot to grab a double shot of espresso,” said spokesman Todd Brogan, who said Mr. Albanese also practiced with role-playing with his team ahead of other debates. 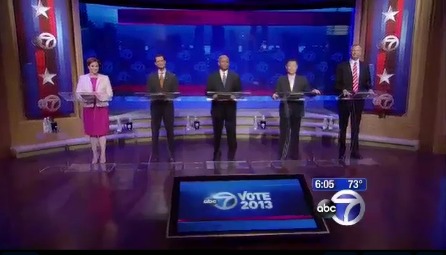