NEWARK – What started as cyberspace intrigue and chest-thumping turned into showdown time in a federal courtroom when the protagonists faced each other in the hacking trial of West New York Mayor Felix Roque.

Hudson County Freeholder Jose Munoz (pictured) told a jury he was scared of retaliation when he set up an anonymous website and FaceBook page aimed at upending Roque, who’s charged with abusing his power by collaborating with his son to hack and disable Munoz’s attack delivery system.

“There was stuff going on that I thought was unethical and I wanted to stay anonymous,” said Munoz, who fashioned a FaceBook character named Maria Pasquale and set up a website with Pasquale’s name to attack the sitting mayor.

“Is that you?” the prosecution asked Munoz, who looked at a screen and the face of a middle-aged woman.

“No,” the freeholder said. “I wanted to give a face to the website. I found this picture on the Internet and I liked it. I don’t know this person.”

Munoz acknowledged stocking the site with anti-Roque articles and paraphernalia.

Prosecutors allege that Roque, with the help of his son, hacked the site and prevented Munoz from being able to again access the site.

Munoz said he initially thwarted several attempts by what he suspected were Roque allies to make contact under aliases, including someone purporting to be Cosimo Sirillo, the former chief of staff to former Mayor Silverio Vega.

But shortly after he failed in his attempts to access the websites and FaceBook page he had set up with the name Maria Pasquale he said he received a call from Roque, who said he had fingered Munoz as a key organizer behind the Recall Roque movement.

“He was angry,” the freeholder said. “He told me he had important friends in the government and that anyone who had access to the (Recall Roque) website would pay for it.

“I was afraid,” said Munoz. “He told me he had important friends in government places and I was afraid.”

The freeholder said he called the FBI, and special agents subsequently fitted him with a recording device for a Feb. 12, 2012 meeting with the mayor at City Hall.

Roque’s defense attorneys will get a chance to question Munoz on Monday. 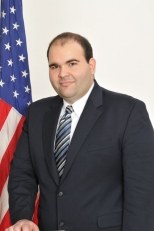