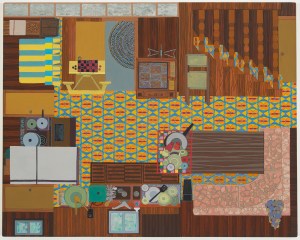 Monya Rowe has moved her gallery from Chelsea to a former wholesale hosiery shop on Orchard Street, with a group show by the gallery’s artists for a housewarming. Angela Dufresne’s ecstatically muddy oil painting Lake Champlain Car Ferry pictures the world as an infinitely recursive, pantheistic sexual gestalt. A tide of tumultuously dirty pink clouds, punctuated with white curlicues and snatches of gorgeous blue, rushes over the viewer, connected by a half-dozen streaks of light, like veins of ether, to the reflective surface of the lake. As taut as strings of saliva between two lips parting to kiss, these sunbeams give a sense of the world as only an intimate interruption between heaven and Earth—which leaves the human figures in the foreground, raising their muddy flag on the ferry, as overshadowed as dust and ashes. Jake Longstreth’s oil Particulate Matter Reflection uses a similar formal premise to an opposite end: A line of low, wooded hills, alluding only gently to the form of a woman sleeping, is reflected, white with wintry age, in the serene mirror of a perfectly still lake. Where Lake Champlain is medievally carnal, taking its mortality with a flagon of wine, Particulate Matter has the aestheticized detachment of a haiku; its disappearing brushwork and singular green coloring make the whole look like the reflection of a reflection with no original. Ann Toebbe’s small gouaches Finished Basement and TV Room are the opposite of an opposite again, aerial views of flattened-out rooms like cut-paper collage, homey to look at but with no room to enter, while Joe Pflieger’s two ink-jet prints, Escalators and Bridgewater Mall, use deftly composed photographs with slight adjustments of color to create scenes at once specific and impossible to locate. The former, a viscous, orange and blue confusion like an alien breastplate, was taken from an escalator and shows skylights reflected in curved chrome panels; the latter, a moody red remove, past white windows, to an inscrutable roof, is the shopping mall’s ceiling turned on its side. And Vera Iliatova’s oil painting Dilemma with Jane shows a vase of red flowers on a windowsill against an overgrown garden. Despite its distinct colors and confident brushwork, the bouquet half-disappears into the background in a way that, by calling the world’s borders into question, would create a deeply subdued feeling of eeriness even were it not for the five young women, one lying half-naked on the turf, one standing in a tree, all of them minuscule as fairies, taking their ease out in the garden. (Through Oct. 20)