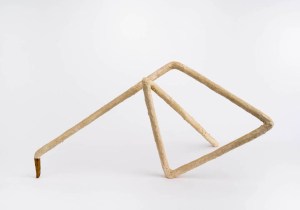 The Lower East Side’s Nicelle Beauchene Gallery announced today that it now represents the Brooklyn-based sculptor Jennifer Paige Cohen, whose recent work has taken the form of abstract sculptures in materials like plaster, gauze, cement and stucco that often contain hints of the body, whether with spindly, limb-like appendages, intimate folds or the occasional odd little hand.

You may be familiar with Ms. Cohen from Beauchene’s May show, “Valori Plastici,” or group shows at Southfirst (“That Sinking Sense of Wonder,” 2012, organized by Jesse Bransford), P.P.O.W. (“Magic for Beginners,” 2011, by Jamie Sterns and Joseph Whitt), Brennan & Griffin (“7 Sculptors,” 2010) and numerous other venues around town.

Ms. Cohen will have a show at Beauchene in October 2014.