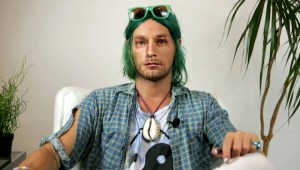 Josh Kline is excited about the future. More specifically, he’s excited about the 3-D-printed, brand-saturated, Internet-addled pharmaceutical singularity of nano-abundance and clean, white surfaces that’s coming on like the end of the world. It’s a future in which computer-assisted personal immortality meets the final dissolution of personality and everyone will be alive for 15 minutes. So he has made hollow, 3-D-printed busts of several fashion designers, colored in their signature prints, and displayed the busts on translucent pedestals like handbags in an upscale boutique; he has doped pig’s blood with Welbutrin and agave, to be stored in clear, cast urethane replicas of Rubbermaid coolers; he has one-upped Blueprint Juices with IV drips of spirulina, Red Bull and gasoline; and he has shot TV magazine-style interviews with Kurt Cobain and Whitney Houston, using the singers’ own faces digitally mapped onto living actors. In Forever 27, Mr. Cobain sullenly explains that being with other people and being alone are equally bad; in Forever 48, Whitney Houston refuses to dissemble about how much she enjoyed cocaine when she was young. Is all of this magic for the good or bad? The distinction seems a little bit retro. (Through Oct. 13)