David Koch and his wife, Julia, have each contributed $145,050 to “New Yorkers for Proven Leadership,” which will begin airing television ads tomorrow touting the former MTA chairman and deputy mayor, sources said.

“We believe that Joe Lhota represents the best hope for the future of the city so we can deal with the fiscal crisis that we’re facing in a responsible way so that we can continue to promote good jobs, safe streets and keep the city moving forward in the right direction,” the group’s spokesman, Michael McKeon, told Politicker this evening.

The expenditures are expected to be filed with the city’s Campaign Finance Board later today.

To kick off their efforts, the group will be running  two 15-second “bookend” spots, produced by Something Else Strategies‘s Heath Thompson and Lori Raad–vets of Rudy Giuliani’s 2008 presidential campaign. The first, entitled “Ready,” features upbeat music and an early-90s-looking background, and heavily touts Mr. Giuliani’s endorsement, while declaring Mr. Lhota the only candidate who will keep the crime rate in check and the “take on the fiscal crisis.” The second, titled “Joe Knows,” takes a more serious tone, stressing Mr. Lhota’s “strong conservative leadership,” his experience with “crisis,” and “results.”

Mr. Lhota is currently fighting an increasingly nasty primary battle against billionaire John Catsimatidis, who has flooded the airwaves with tough attack ads, but recent polls show Mr. Lhota holding a considerable lead. Mr. McKeon said that the group was ramping up its efforts now to take advantage of the fact that people are paying attention–not because they’re worried about the primary.

He said the group has had a “very good response from a number of very prominent New Yorkers” and that more are expected to deposit checks soon.

Mr. and Mrs. Koch have made their preference for Mr. Lhota clear and already contributed the maximum $4,950 each to Mr. Lhota’s campaign last week, city finance records show. 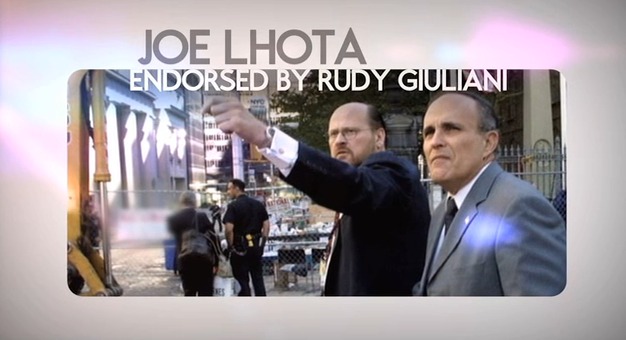