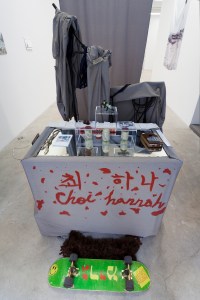 You have to hand it to Asher Penn, the multitasking artist and publisher who organized this show. His curatorial premise is a touch flimsy and awkward—female artists under the age of 30 (a milestone Mr. Penn reached last year) with rich online presences that blur art and life—but it has resulted in a finished product that feels bracingly au courant, for better and worse. People are arguing about it. You should see it, preparing both to swoon and roll your eyes.

The seven artists are all over the map, aesthetically. Al Baio is showing sharp cartoon portraits of deranged-looking children in bright, high-contrast colors. They are charming, if a bit too indebted to Gary Hume. Amalia Ulman has lined three shelves with dozens of simple little copper wire sculptures of roses, butterflies and girls that earn a bemused smile. Bunny Rogers offers up a wet mop with its head dyed pink and purple, titled as a self-portrait. Analisa Teachworth shows an intriguing, grainy eight-minute video that features two hooded people (their gender is not totally certain) hugging and a creepy voice-over that threatens violence. The excellent Petra Cortright has digitally printed an abstract metallic blob and photos of palm trees on satin. Made in 2011, the piece already looks dated, which is perhaps the point: Art moves quickly these days, especially for emerging artists navigating the digital-analog divide.

Maggie Lee’s work seems particularly representative of such artists, who haphazardly experiment with aesthetic codes, mixing images and graphic design that are old and new, “good” and “bad,” into rich artistic stews, often seasoned with glimpses of their personal lives. She has adorned her Pratt diploma with sexy anime-style stickers from a skateboard company and presents a VHS video on an old TV (also plastered with stickers) with snippets of her life and the odd YouTube-style selfie in which she plays with gummy candies, among other things. (The title of the show comes from the username of a teenage girl whose popular YouTube diary in 2006 was revealed as a miniseries.)

And then there’s the artist known as Greem Jellyfish, who has made ceramics, photos, fabric painting and even a printout of a feature she made for Mr. Penn’s bracingly cool, confusingly named online-only Sex magazine (it’s about culture). It’s amounts to a pleasant, half-baked mess, like the show as a whole, which fits snugly into the grand tradition of exhibitions made by ambitious young artists predominantly for themselves and their peers. Have a look as they sort things out, and file away their names for the future. (Through Oct. 26)