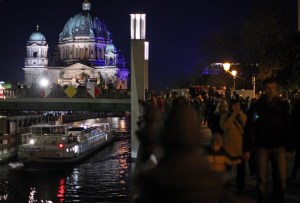 It’s not just the New York art world that is experiencing some major gallery-location changes. Over in Berlin, Galerie Max Hetzler is planning to open two new spaces in West Berlin this weekend, one with an Albert Oehlen solo show, the other with a group show. Hetzler said it will close its gallery in the Wedding neighborhood in December, following a 40th-anniversary show that opens in November.

Here’s more on the new spaces, via a news release:

“One space is in Bleibtreustraße 45, on the first and second floor of a Wilhelmine residential building and the other in Goethestraße 2/3, on the ground floor of an industrial building which used to be a post office. The two galleries will be offering artists truly different types of venues and are walking distance from each other.”

Meanwhile, the gallery, which works with artists like Mr. Oehlen, Bridget Riley, André Butzer and Rebecca Warren, says that next year it will open a space in Paris near the Centre Pompidou.