WASHINGTON, D.C. – The ordinarily intensely private U.S. Sen. Bob Menendez (D-NJ) opened up with a personal reminiscence from his childhood in Union City as he closed the day.

Making a point about standing up to bullies, the chair of the U.S. Senate Foreign Relations Committee recalled a bully in his Union City neighborhood.

“He slapped me in the face,” said Menendez, and when he told his mother about it she said, “Avoid him.”

Menendez said he tried but again encountered the bully.

“He punched me in the nose and bloodied it,” Menendez said.

He again went to his mother for advice and she again said, “Avoid him. Just avoid him.”

“It wasn’t until the third time I was near a construction site,” Menendez said, when the bully again tried to engage him.

“I picked up a piece of wood and whacked him and I never got bullied again,” Menendez said.

He drew a parallel to the Assad Regime and what will happen if the United States does not retaliate for Assad’s gassing of his own people, according to a case made by the Obama Administration.

“Assad believes he can use chemical weapons without consequence,” said Menendez, the administration’s ally in building support for a use of force resolution. 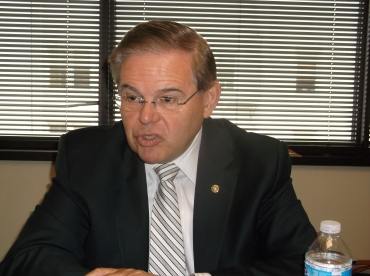