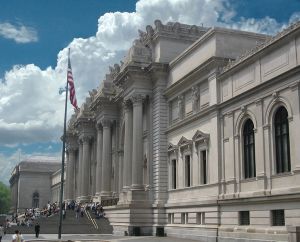 The Metropolitan Museum of Art today announced new curators for its American Wing, its department of the arts of Africa, Oceania, and the Americas, and its Egyptian art department, where Diana Craig Patch will serve as the new curator in charge.

(New York, September 10, 2013)—Thomas P. Campbell, Director and CEO of The Metropolitan Museum of Art, announced today the appointment of Diana Craig Patch as Curator in Charge of the Museum’s Department of Egyptian Art. She has been serving as acting head of the department since the retirement of Dorothea Arnold last year. Her election took place at today’s meeting of the Board of Trustees.

“Diana is a consummate curator, scholar, and archaeologist who has played an important role in the Department of Egyptian Art for the past 17 years,” said Mr. Campbell in making the announcement. “I look forward to working with her in her new capacity as she leads the department’s team of superb curators in presenting exhibitions and overseeing the Museum’s vast Egyptian collection—one of the finest in the world and one of the most studied and most visited by our millions of visitors each year.”

He continued: “An important part of Diana’s responsibilities will also be to work with her department to carry on the Museum’s long-term commitment to excavation and research in Egypt. We wish the best for Egypt in this difficult time and are dedicated to continuing our ongoing and very positive relationship with our colleagues in the museums and excavations there.”

Most recently, Diana Craig Patch served as Acting Associate Curator in Charge (2012-2013) and Acting Curator in Charge (2013) of the Department of Egyptian Art. She began her career at the Metropolitan Museum in 1996 as Gallery Administrator for Egyptian Art and was subsequently Senior Research Associate and Gallery Administrator (2001-2003), Assistant Curator (2003-2008), and Associate Curator (2008-2012). Earlier in her career, she was research associate for the Egyptian Section of The University Museum at the University of Pennsylvania.

She curated the popular and critically praised exhibition The Dawn of Egyptian Art at the Metropolitan Museum in 2012 and co-curated with Dorothea Arnold the reinstallation of the Museum’s Predynastic and Early Dynastic gallery in 2004. She also co-directed the Walton Hall of Ancient Egypt at the Carnegie Museum of Natural History in Pittsburgh (1985-1990). She has published and lectured extensively and has been an Adjunct Assistant Professor in the Department of Art at City College, City University of New York, and a lecturer at Rutgers University and the University of Pittsburgh.

Her field experience includes, most recently, her work as Project Co-Director of the Joint Expedition to Malqata, a project to map, survey, and excavate the festival city of Amenhotep III (2008-present). She has also been a field consultant to the Metropolitan Museum’s Egyptian Excavations at Dahshur, Egypt (1999-2000); Director of the American Research Center in Egypt’s Field School Project at Memphis (1995-2003); and Field Director of the Pennsylvania-Yale Expedition to Abydos, Egypt (1982-83).

Diana Craig Patch is currently organizing the exhibition Cleopatra’s Needle to celebrate the new conservation project on the obelisk of Thutmose III, a gift from Egypt to the United States in 1879 that is installed in Central Park behind the Metropolitan Museum. The exhibition—which will be on view at the Met from December 3, 2013, through June 8, 2014—will explore the meaning of obelisks in ancient Egypt and consider how these massive monuments were created and erected. It will also illustrate the impact of the ancient architectural form on western culture and the long-standing fascination with obelisks that continues today through examples like this one in Central Park.

(New York, September 10, 2013)—Thomas P. Campbell, Director and CEO of The Metropolitan Museum of Art, announced today that he made two recent appointments within the Museum’s curatorial departments. Joanne Pillsbury, a specialist in the arts of the ancient Americas, joined the Museum’s staff on September 9 as the Andrall E. Pearson Curator in the Department of the Arts of Africa, Oceania, and the Americas. And Ronda Kasl, a specialist in the art of Spain and Colonial Latin America, began work on July 1 as a Curator in the American Wing.

In making the announcement, Mr. Campbell stated: “The arrival of these two fine scholars will allow us to enhance and develop our coverage of artistic traditions that developed across the Americas both before colonialism and beyond. I look forward to working with Joanne to advance appreciation for the Met’s ancient American holdings, an area in which the Museum has been a long-time leader, and to focusing with Ronda on building a significant representation of Colonial Latin American art.”

Joanne Pillsbury
The new Andrall E. Pearson Curator in the Metropolitan Museum’s Department of the Arts of Africa, Oceania, and the Americas is Joanne Pillsbury, who was formerly Associate Director at the Getty Research Institute. A specialist in the arts of the ancient Americas, she served as Director of Studies for the Pre-Columbian Program at Dumbarton Oaks Research Library and Collection, Harvard University, from 2005 to 2012. Earlier in her career, she was the Dumbarton Oaks Professor of Pre-Columbian Studies at the University of Maryland (2002-2005), and Assistant Dean of the Center for Advanced Study in the Visual Arts, National Gallery of Art (1995-99). She has taught at Johns Hopkins University and the University of East Anglia.

Ms. Pillsbury publishes and lectures extensively. She was editor of the three-volume Guide to Documentary Sources for Andean Studies, 1530-1900 and Past Presented: Archaeological Illustration and the Ancient Americas, among other publications. As co-editor of the 2012 catalogue Ancient Maya Art at Dumbarton Oaks—with Miriam Doutriaux, Reiko Ishihara-Brito, and Alexandre Tokovinine—she received the College Art Association’s Alfred H. Barr, Jr., Award for an especially distinguished catalogue in the history of art, published under the auspices of a small museum, library, or collection.

Ms. Pillsbury received her B.A. in anthropology from the University of California, Berkeley, and her M.A. and Ph.D. in art history and archaeology from Columbia University.

Ronda Kasl
Prior to her appointment as Curator of Colonial Latin American art at the Metropolitan Museum, Ronda Kasl was Senior Curator of Painting and Sculpture before 1800 at the Indianapolis Museum of Art (2008-2013). She previously served there as Assistant Curator, Associate Curator, and Curator (1992-2008). She organized exhibitions at the Indianapolis Museum that included Sacred Spain: Art and Belief in the Spanish World (2009-2010), Giovanni Bellini and the Art of Devotion (2005), and Painting in Spain in the Age of Enlightenment (1997). Among her publications is The Making of Hispano-Flemish Style: Art, Commerce and Politics in Fifteenth-Century Castile (2013, in press). Works in progress include a scholarly catalogue of early Spanish paintings (pre-1600) in the collection of The Metropolitan Museum of Art. Among her many grants and fellowships, she was awarded a Chester Dale Fellowship in the Department of European Paintings at the Metropolitan Museum for six months in 2012-2013.

Ms. Kasl received her B.A. in art from the University of Tulsa, and her M.A. and Ph.D. in art history from the Institute of Fine Arts, New York University.