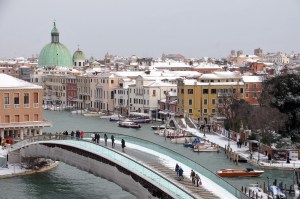 A seven-acre public art site will open later this month in a lot on the Atlantic City boardwalk formerly occupied by a casino, with work by Kiki Smith, Robert Barry, Ilya and Emilia Kabakov and others. [ARTnews]

Architect Santiago Calatrava, whose design for a new PATH train station at ground zero “is six years behind schedule and will cost $4 billion, twice the original budget,” has garnered criticism in recent years. [NYT]

Michelle Obama hosted an event at the Studio Museum in Harlem. [NYT]

“Will L.A.’s Museum of Contemporary Art hire a museum director who actually has experience in running a museum? The last time it did, Jimmy Carter was president and MOCA was still three years away from opening its doors.” [LAT]

“Is there no end to Bob Dylan’s artistic talents? A collection of portraits by the legendary US singer is drawing the crowds at London’s National Portrait Gallery (until 5 January 2014). But Bob is also a sculptor, crafting seven iron gates welded out of vintage iron and other metal parts. These intriguing pieces, along with a selection of paintings, are due to go on show at the Halcyon Gallery in London (‘Mood Swings,’ 16 November-25 January 2014)” [The Art Newspaper]

Here’s a think piece about what one man thinks the next LA MOCA director should be like. [Los Angeles Times]