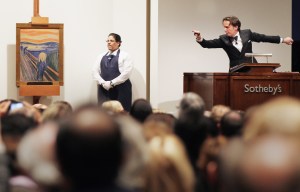 Sotheby’s London is planning to launch a new gallery for private sales. The space will open in October during Frieze Week with a debut show of works by Joseph Beuys. [Bloomberg]

The Willem de Kooning Foundation will sell off ten late works via a fall show at Gagosian gallery in order to fund the creation of a catalog raisonné for the artist and an endowment for education. [NYT]

Former New York dealer Paolo Baldacci is challenging the Giorgio and Isa de Chirico Foundation, accusing the organization of shoddy scholarship and authentication efforts in a number of studies. [The Art Newspaper]

Here’s a profile of Wangechi Mutu, who will have a survey at the Brooklyn Museum in October. [New York]

One Bonhams auction suggests that the American Indian art market may be heating up again. [Art Market Monitor]

A Rosetti painting will be auctioned for the first time at Sotheby’s London. [The Guardian]

Detroit Institute of the Art’s director says selling the museum’s art “would be tantamount to closing the museum.” [Los Angeles Times]

“The Royal Geographical Society (RGS) is selling paintings valued at £4.2m to plug a deficit in its pension scheme. The works, by the English artist Thomas Baines (1820-75), which record the early history of Australia, seem destined to go to the southern hemisphere, subject to the granting of an export licence.” [The Art Newspaper]