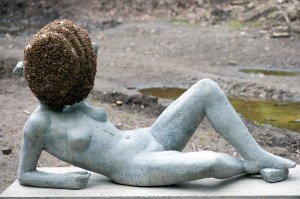 Art critic Martin Gayford muses on what it’s like to sit for Lucian Freud and Jonathan Yeo. [Bloomberg]

Thelma Golden, Bono and others will party to raise funds for the New Africa Center, formerly the Museum for African Art, the reopening of which has been repeatedly delayed. [Page Six]

In case you missed it: that Art Loss Register seems to be a scheme. [NYT]

Here’s a Q&A with Pierre Huyghe, who has famously used animals ranging from hermit crabs to penguins in his work and whose retrospective at Centre Pompidou opens in a couple of days: “The context at the Pompidou is defined—it’s not the place to do an experiment, but that doesn’t mean I can’t play within the rules or the protocol given by the museums.” [The Art Newspaper]

“In Ed Ruscha’s Work, a City Sits for Its Portrait.” [NPR News]

Can never get enough Zaha Hadid interviews, let me tell you. [The Guardian]

The Autrey National Center in Los Angeles, named for the singing cowboy Gene Autrey, whose money helped fund the museum, is trying to “reinvent” itself. [NYT]