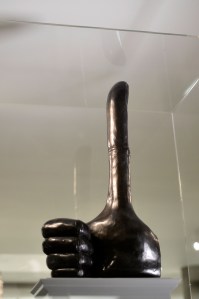 “A thumbs-up sculpture, a horse skeleton and dancing cones are
competing for the vacant platform in London’s Trafalgar Square known
as the Fourth Plinth.” [Bloomberg]

The artists that resigned from LA MOCA’s board have joined its team to search for a new director. [Los Angeles Times]

Waldemar Januszczak: “The real problem with the art world is not the money men scavenging in its wake—they’ve always been there—but the pirates who’ve taken over the ship. I am thinking of course of that awful art world species: the curator.” [The Guardian via Art Market Monitor]

Phillips places a doozy of an item on Page Six. I mean, it’s
ostensibly about Leonardo Di Caprio but Phillips is mentioned as many
times as he is, if not more. High five, Phillips! [Page Six]