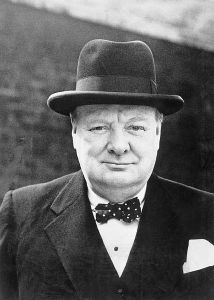 Gerald Buck, who may have the largest collection of work by California artists in private hands, died at the age of 73. [Los Angeles Times]

The curator of the Moscow Biennial explains why the art world shouldn’t boycott the fair, which opens on Sept. 19, despite Russia’s anti-gay laws. [The Art Newspaper]

After two years of scrutiny, researchers have determined that a newly discovered Van Gogh painting is authentic. It will go on view at the Van Gogh Museum in Amsterdam later this month. [Bloomberg]

A new book examines Winston Churchill’s little known work as a painter. In case you were wondering how his efforts compare to Hitler’s, “Churchill surpassed the Fuhrer in art just as he did in war.” [Daily Telegraph]

“French art dealer Emmanuel Perrotin will celebrate the opening of his first New York branch with an amusement-park- and carnival-themed bash where some of his artists will man interactive game booths.” [Page Six]

“How did the artistic legacies of Motherwell, Rauschenberg and Twombly turn into the gunfight at the O.K. Corral?” [Bloomberg]