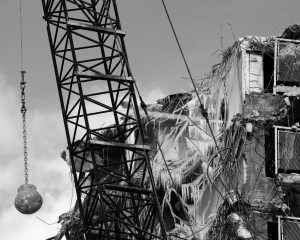 “L is for Lamb.” Damien Hirst releases a picture book for children. [The Guardian]

Ted Loos profiles Amy Sillman, who will have her first museum retrospective at Boston’s Institute of Contemporary Art this month. The show is being curated by Helen Molesworth, who has apparently nicknamed the artist the Wrecking Ball. [NYT]

In case you missed it, here’s an update on the NY Attorney General’s efforts to prevent the sale of a Thomas Cole painting that had long hung in the historic Seward House in Auburn, N.Y. [CultureGrrl]

“The future of the Foundling Museum’s collection is under threat after the recent takeover of the board of the London museum by the Coram children’s charity.” [The Art Newspaper]

Here’s a profile of obsessive painter Frank Auerbach, who discusses his influences, competitive friendship with Lucian Freud, and general aversion to being demystified: “I am the beast in the burrow who does not wish to be invaded.” [Daily Telegraph]