Jeff Bezos visited The Washington Post yesterday afternoon. The Post, which is getting very adept at covering itself, has some details about its new owner (it’s almost like the reporters were there!).

Mr. Bezos  was “dressed in tan pants and a white shirt open at the collar” and “maintained a genial, inquisitive manner punctuated by occasional outbursts of laughter.” To call editors to the afternoon meeting, the Amazon founder followed the decades-old tradition of striking a triangle, which makes the Post newsroom sound more like a nursery school than a newsroom. But no matter, the nod to precedent “prompted a ripple of applause as he smiled for a photographer before walking into the news meeting.” (The Washington Post)

But why are some of these articles about the Post‘s new owner in the Style section online? Because that’s the desk that Paul Fahri, the reporter who has written many of the stories, is on. (Nieman Lab)

News Corporation announced that it has sold 33 local publications to a private equity and hedge fund firm. Details of the deal were not announced, but the money involved couldn’t have been that much because News Corp didn’t have to disclose significant financial details of the transaction. (The New York Times)

How much power does Rupert Murdoch have over Australian politics? Do Australians really want to watch a musical that covers Mr. Murdoch’s life in exhaustive detail? Does Mr. Murdoch? (Trust the Toffs!/The New York Times)

Dealbook’s Matt Levine is going to Bloomberg View, where he will cover finance as a columnist. (Politico) 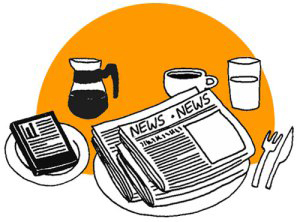