And speaking of Newsweek, The Newspaper Guild has accused IBT of “illegally muzzling” its employees by also “prohibiting its journalists and other employees from discussing their working conditions or criticizing their employer,” which arguably violates U.S. labor law. (Adweek)

In the past two years, Rupert Murdoch’s News Corp has spent $382m on legal fees related to the News of the World phone-hacking scandal. (Press Gazette)

Former F.B.I. Agent Donald Sachtleben has agreed to plead guilty to leaking information to the Associated Press about a foiled bomb plot in Yemen in 2012. (New York Times)

Will Katie Couric take over at The View from Barbara Walters when she retires? New View co-host Jenny McCarthy wouldn’t comment when she went on Howard Stern, but Mr. Stern said so and The Daily News recently reported the rumor that Ms. “Couric had been in talks to leave her show and plop down in Babs’ well-worn chair.” (Daily News) 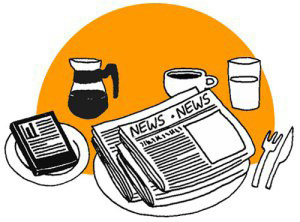