Tired of insubordination, the chairman of the Morris County Republican Committee wants party members to freeze out a general election Republican candidate for freeholder.

In a letter he sent to party members today, the veteran chairman reminded his fellow Republicans that following the GOP Primary there would be no individual fundraisers until after the November election.

“The reason is simple,” Sette said. “The County Organization funds the November Election for the County Candidates and many municipal candidates.   MCRC always has its annual fundraiser in early October. This year we have three Freeholders, the Sheriff and the Clerk up for election. As you are all aware, Freeholder Mastrangelo has had many fundraisers in the last twelve months.  He even employs a professional fundraiser from outside Morris County to pursue you for contributions. His ELEC filing from after the June election shows that he has a balance of about $29,000.00 in his account.  This is more than all the Freeholders combined.”

Sette said eight weeks ago he asked Mastrangelo (pictured) to change the date on his golf outing, as it would go against the County policy.

“I told him that it would hurt our ability to raise the necessary funds to run both the County and Town elections,” Sette wrote. “He chose to ignore our conversation and place his own needs above those of his fellow elected County officials and municipal County Committees. …As Chairman of the County Committee I have the duty to protect the integrity of our Party.

“Freeholder Mastrangelo has consistently shown that his personal needs are more important than those of the entire Republican Party of Morris County,” the chairman added. “The irony of all of this is that MCRC would have been the one to pay for his November election. Therefore, as Party chairman I am asking you not to support the Sept. 18, 2013 golf outing of this self serving man.  I apologize for having to write this letter but our great Party and County Organization are more important than any one individual.” 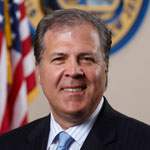