Hello! It is I, Mr. Monocle, back once again to provide you with an expert opinion on the world around us. This month’s destination is… the city of Chicago! Maybe you’ve heard of it? Well then, you’re one ahead of me.

After arriving at O’Hare International Airport I hopped into Observer editor Jen Wright’s family limousine, which she’d kindly provided for me. (Although, can you really call it a limousine if it only has one bar, that everyone in the vehicle has access to?)

As we drove down Michigan Avenue I took in the city. It appeared the typical Chicagoan favored skinny-laced dress shoes paired with decades-too-late dungarees, baggy tops and blow-dried hair parted down the middle for maximum amusement value. There’s an old saying, “In the land of the blind the one-eyed man is king.” Well, friends, the people of Chicago dress like they’re in that mythical land of the blind. I’m pretty sure the one-eyed man gouged it out to avoid having to look upon any more Chicagoans.

Harsh? No, boot-cut jeans are harsh.

Chicago is famous for its improv theaters such as the Improv Olympic (iO) and Second City. Improv, for those who don’t know, is like sketch comedy only performed in a hurry, minus the writing. I watched for a few moments and then improvised a scene wherein I left the theater, hailed a cab and went anyplace that wasn’t there. It went over very well with my audience of one.

The following morning I toured the famed Museum of Science and Industry. I saw, among other things, tiny baby chicks hatching from eggs. Quite a sight! One wide-eyed little girl asked her mother, “Do they know where they are?” The mother said she didn’t think so. I prayed she was right.

Next up was some famous Chicago-style hot dogs and deep-dish pizza. For the pizza I visited a nondescript place off of Lake Street, with an ethnic Italian-sounding name. It was the name of a part-time roofer, doing his best to make ends meet, who had a dream for a pizza place and then that dream slipped away. It was fine. I’m no expert on pizza but for the Chicago variety I’d suggest they maybe get some shallower dishes? I mean, why mess with the perfection of the New York slice? I skipped the Chicago-style dog fearing perhaps they decided it wise to fashion it into a circle or rhombus or put a little edible hat on it.

A man in the pizza shop told me I “Gotta visit the Navy Pier. They have photo booths!” So I did. The Navy Pier is what it sounds like, a Navy Pier, only set up with shops, rides, restaurants, and even a mini circus. It was fun, one of the best experiences I’ve ever had* (*roofless malls on boats category.) And I even found the photo booth. Yes, it takes nice photos, but what they don’t mention is that every photo will be of you in Chicago. I returned to the comforts of the limousine.

Apparently Chicago is known as both the “Windy City” and the “Second City.” The latter is great news as far as having a backup plan if something should ever happen to the first city, but until that day comes I don’t see a reason to visit. Chicago? More like Chica-DON’T-go. 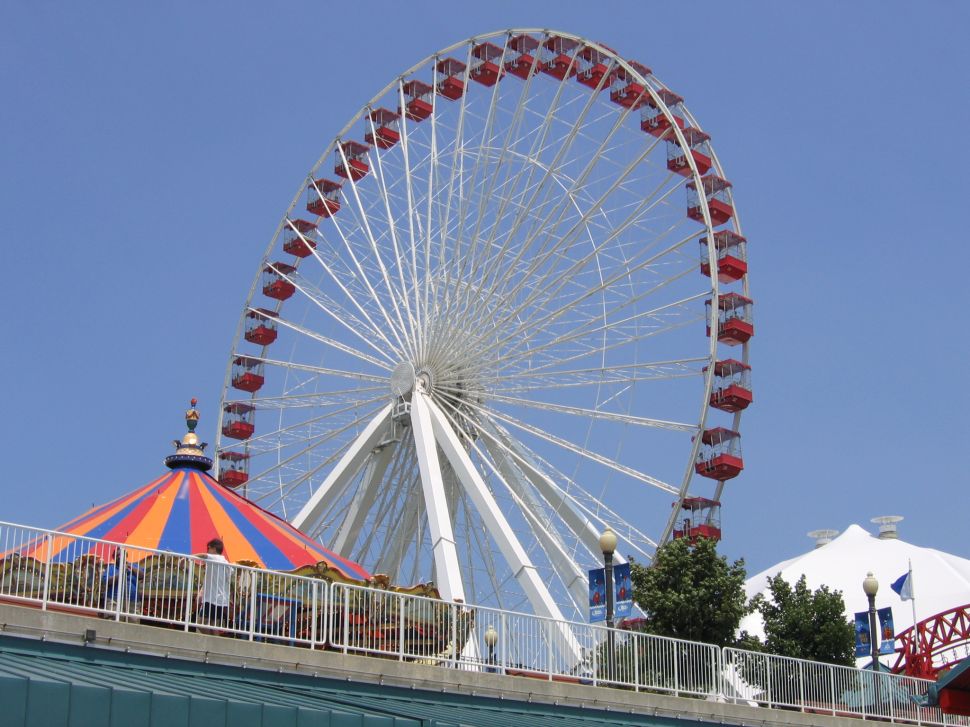