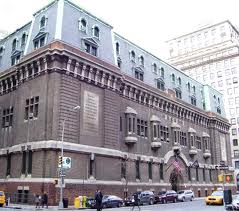 If you’re like us ’round here at The New York Observer, you just can’t get enough of art fairs–those fluorescent-lit caverns of happy mercantile exchanges and modest purchases where nothing ever goes wrong. Good news! There’s a new art fair! Another one! Bring it on! Oh yeah! Never can get enough of those wonderful things: art fairs!

This one’s called Downtown Armory Fair, and it will be held at the 69th Regiment Armory on Lexington Avenue during Frieze New York (May 8-11)–a time when there just aren’t enough art fairs already. There will be 50 galleries from around the world at this bad boy. Fifty.

If you’re maybe getting a little tired of art fairs and feel nothing but a deep, empty chasm where your soul used to be every time you even think about having to ask someone “Have you sold anything yet?” an indescribable amount of times–like, calculus is not an advanced enough science to categorize, even in a ballpark way, the number of times–well, then, I guess you’re just out of luck, buddy.