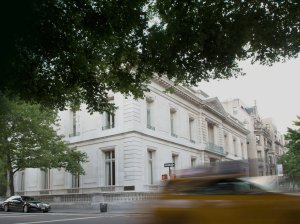 As if being a student at New York University’s Institute of Fine Arts wasn’t already a rich enough experience, the school has announced that it will inaugurate a new curatorial series that will present works by major contemporary artists twice a year at its Duke House mansion at 1 East 78th Street.

The program will be called The Great Hall Exhibitions, and first up is Lynda Benglis, whose show runs Sept. 15 through Oct. 20. Organized by NYU professor Robert Slifkin and Ph.D. candidate Jeffrey Uslip, it will include four works, including two of her latex pour pieces from the 1960s.

Those of us not lucky enough to be enrolled in IFA’s graduate programs will be able to take a look at the shows on Sundays between 1 and 4 p.m.