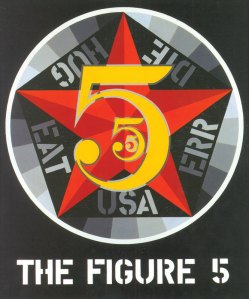 In 1964 the Pop artist Robert Indiana designed a Christmas card for the Museum of Modern Art’s gift shop. By then he was already a part of the art scene that had coalesced around Lower Manhattan’s Coenties Slip, and he was known for his “American Dream” painting series, which featured numbers and stencils that seemed to speak of a postwar codification of emotions, and for his “herm” sculptures, made from the wooden posts of the old buildings on the Slip, and based on the herma posts of antiquity, which served both religious and cartographic purposes. It was the card’s design, however, that launched him to fame: the word “love” in garish colors, broken into two lines, with a tilted “O.” It was a hit when it debuted, and it soon became an icon of the 1960s.

This month, the Whitney Museum debuts “Robert Indiana: Beyond LOVE,” which seeks to reintroduce Mr. Indiana’s non-LOVE pieces to the art world. Last week, Mr. Indiana, 85, spoke with The Observer over the phone from his home on Vinalhaven, an island off the coast of Maine where he has lived in a four-story Victorian house at the center of town since 1978.

How do you feel about the retrospective?

Overdue, overdue. I was going to have a show at the Grand Palais in Paris, and that was cancelled for various mysterious reasons, and when that show got cancelled it simply got moved to the Whitney.

Did they consult you much?

I’ve been working with the curator, Barbara Haskell. I’ve spoken with her several times within the last year and she’s been here to visit. Today, the pieces I’m lending for the exhibit have just left the studio.

I’ve read that you have a large collection of your own work.

I am a museum!

Is there anything that you wish had been included in the show that isn’t there?

Barbara was going to show the Eat film, the Andy Warhol film. There are only two people in Eat, myself and my favorite cat, Pachiki , and for 40 minutes I eat one mushroom. But I think she’s cancelled that out because there’s simply not room to have a dark room for the film.

Were you and Warhol close?

Andy and I had shows at the same gallery, the old Sable Gallery. That’s where he had his Brillo Boxes, and that ended our friendship right there.

Because back in those days artists exchanged works. I have almost everybody except Warhol,  because what he proposed was a Brillo Box for a LOVE, and I’m afraid I didn’t appreciate that. I didn’t want a Brillo Box.

How did you select the words used in your Pop-ier pieces?

How do you feel about the relatively small presence of LOVE in this show?

I think I understand Barbara’s mission, and that is she simply feels that it’s been so long since people have seen a wide range of my work that she wanted to focus on that.

Who were your earliest influences?

Oh there’s very little question about that. The man’s name is Demuth, Charles Demuth. My favorite painting in the Metropolitan [Museum of Art] happens to be one of his works, I Saw the Figure 5 in Gold (1928).

And it was not only him. It was William Carlos Williams, you know, who saw the fire engine with the “figure 5/in gold.” I think we might think about Hopper, very much. And I didn’t think much about Marsden Hartley until very recently, but Gertrude Stein found him to be the best American painter in Europe at the time she was alive. I consider my tributes to him my most important works. In fact they dominate the top floor of my Vinalhaven house.

Why do you consider them to be the most important?

Let’s say I put more of my heart into them than into any other works. I am very concerned with people who suffered tragedy, and Hartley suffered one tragedy after another.

Where else does your work with numbers originate? It wasn’t only Demuth, was it?

Definitely not. It’s based on the fact that before I was 17 years old, I had lived in 21 different houses, and it was a favorite pastime of my mother and my father and myself to go driving around Indianapolis checking out all those houses. And of course there would be house number 1 and house number 2 and that’s where the numbers began. I had a mother who simply felt the next house was going to be better than the last, and that worked for a while, but with the Depression, it reversed, and it was from one bad house to a worse house.

You don’t think of it that way?

No, it’s all related to tragedy. Tragedy is a rather important ingredient.

Given what I see on television, I think Americans eat it up.

The thing I’m most concerned about now is our president. I tried to help get him elected, that’s what [my 2008 restructuring of LOVE as] HOPE was all about. But I’m a little disappointed in what’s happened. I’m beginning to lose faith in Obama. This Syria thing is ridiculous. He should not be drawing red lines.

Being isolated up here—there is no theater—I do have to depend on TV, and it’s an endless crashing bore.

Oh I’m pretty well stuck with HBO, and I do watch that guy. That blonde-haired chap on channel 13. I mean CNN. Gloria Vanderbilt’s boy.

I knew his father and I also knew her, when she was married to [Leopold] Stokowski.

How did you meet?

She ripped me off a long time ago. I don’t hold it against her. It was some little bauble.

I don’t feel like you’re frequently identified as a “gay artist.” Do you think of yourself that way?

But how does your work fit in the context of American homosexuality, if at all?

It all goes back to the herms.

Those are erect penises. Unavoidable. My secretary is sitting here next to me so I have to watch myself. I get carried away. She’s cringing.

Is that how you’ve always interpreted them?

No, it all harks back to the fact that when I was in high school in Indianapolis, [for] my first real involvement with words, I did six texts in the manner of medieval manuscripts, Latin texts, and those works are still in Indianapolis and still on display in my old high school. I was very much involved with Latin. I received a Latin medal, and I was very fascinated with that whole culture.

Let’s talk about your time on Coenties Slip. You were friends with Ellsworth Kelly…

It was Ellsworth who was responsible for finding me a loft on Coenties Slip, and Coenties Slip has been one of the most fascinating and important chapters in my life, because I was down there with Kelly and Jack Youngman, Agnes Martin, and Rosenquist and [Charles] Hinman. It was a real little artists’ colony away from the nasty Abstract Expressionists uptown. We found a haven down on the waterfront.

You didn’t get along with the Abstract Expressionists?

Was it intimidating when MoMA purchased American Dream I (1961)?

That was the most important painting of my life. Alfred Barr selecting that from an unsuccessful show? After that happened it was like a meteor.

Was everyone knocking down your door?

Not that, but remember, I was on Coenties Slip, and not too many people from uptown wanted to, shall we say, slum it, because Coenties Slip was a slum. My studio was 30 dollars a month. LOVE changed all that, but that was later.

What are you working on right now?

My own autobiography, which is a photo biography. My whole life in photographs. I have thousands of photographs. It completely dominates my studio to such an extent that I don’t even have any room to do any painting now.

Could you ever see moving back to New York?

What would it take to get you back to New York?

A very lovely loft on the waterfront for 30 bucks a month. That would get me back to New York.