Living person John McAfee is ready for his next act. His first, creating a ubiquitous antivirus software, is a distant memory, and his follow-up, sneaking around the globe like a Hollywood bad boy after being named a “person of interest” in a fatal shooting of a neighbor in Belize, is rather mundane.

So he’s ready for his next challenge, which might not reach “faking a heart attack in Guatemalan detention center” levels of insanity but could still be pretty crazy. Mr. McAfee told the San Jose Mercury News that he’s developing a new type of Internet that’s impossible to hack–and it sounds a little more advanced than your typical Brit + Co. weekend project:

“My new technology is going to provide a new type of Internet, a decentralized, floating and moving Internet that is impossible to hack, impossible to penetrate and vastly superior in terms of its facility and neutrality. It solves all of our security concerns,” said 67-year-old Mr. McAfee.

He declined to further elaborate on what the hell that means, but hinted that more details will be revealed at this weekend’s C2SV music festival and tech conference. (He said if the project takes off, he’ll commute between his home in Portland and Silicon Valley because he described the traffic as “nightmarish.”)

McAfee Inc. is a burgeoning empire, too: Two competing movies about his life are due out in the next few years, and a biographical book, a television documentary and a series of graphic novels are all set to be released soon. He’s just a soda endorsement deal away from hitting the jackpot.

If Mr. McAfee sounds like he’s pulling one over on us, he’s had some experience in that department. He admitted that last year’s manic manhunt, where he misled police authorities, penned cryptic blog posts and had Vice accidentally out his hiding spot was all arranged.

“How are they (Belizean authorities) going to whack me if every newspaper in the world is looking? You have to be willing to sacrifice a bit of your public persona to get the media to feed on you. I’m willing to do that. As long as you’re honest to the press, as long as your stories are consistent and you can feel good when you go to bed, it doesn’t matter what they say as long as they spell your name right.” 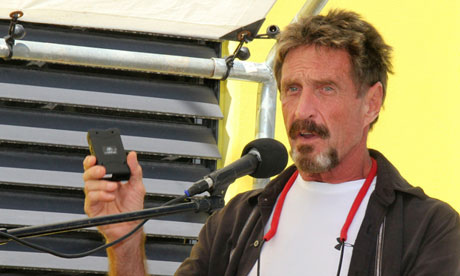