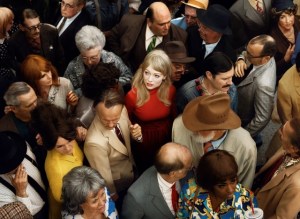 Alex Prager, who is known for her richly saturated color photographs of staged, cinematic scenes, is now represented by Lehmann Maupin. The gallery will present Ms. Prager’s work at Frieze London and at FIAC in Paris, after which the Los Angeles-based artist will be the subject of a major solo exhibition at the Corcoran Gallery of Art in Washington, D.C., opening on Nov. 23. Her debut exhibition at Lehmann Maupin will take place in early January at its Chrystie Street location.

Founder David Maupin first encountered Ms. Prager’s work at the 2010 “New Photography” exhibition at the Museum of Modern Art, where she was one of four participating artists. “I was immediately struck by her distinct point of view and the narrative quality of her work,” he wrote to The Observer. Like Roe Ethridge and Elad Lassry, who were also included in that exhibition, Ms. Prager explores Hollywood, fashion and commercial imagery to riff on contemporary culture.

Both the exhibition at the Corcoran Gallery and inaugural show at Lehmann Maupin will feature Ms. Prager’s newest body of work, in which she directed hundreds of actors to simulate crowd scenes. The series culminated with Face in the Crowd, a film starring actress Elizabeth Banks.

Ms. Prager, who was previously represented in New York by Yancey Richardson Gallery, may soon be joined by other new additions to Lehmann Maupin’s roster. The gallery opened its first international branch in Hong Kong in March and appears to be planning further growth. “Rachel Lehmann and I have been actively traveling internationally over the past year visiting artists studios and cultivating new relationships,” wrote Mr. Maupin from Asia. “You can expect to hear more exciting news regarding Lehmann Maupin’s program over the next few months!”