The crash was caught on CCTV.

This week’s “Most Insensitive Reaction to a Serious Accident” award goes to the New York City Department of Education.

Last week, five Queens students were mowed down by a car while walking to school, leaving three with broken bones.

The driver, Francis-Aung Lu, was apparently parking when he accidentally hit the accelerator instead of the brake, causing him to veer onto the sidewalk near 71st Street and Grand Avenue in Maspeth.

Noting the severity of the incident, the DOE in its infinite wisdom ordered the principal of I.S. 73 to send a letter to parents highlighting the dangers of letting their kids wear headphones while walking — despite the fact none of the victims appeared to be doing just that.

The letter, which was sent out just hours after the accident, stated: “All children must be encouraged to be aware of their surroundings when riding the bus or train and walking to and from the school building. Headphones, CD Players iPODS [sic] or any other electronic devices used by children to occupy their time when commuting can be a threat to their safety.”

Chiara Colletti, chief spokeswoman for the Council of School Supervisors and Administrators, defended the widely-condemned letter and principal Camillo Turriciano, saying he didn’t mean to blame the victims and it was not his choice to send the correspondence in the first place. “He questioned the sensitivity of the letter more than once,” she said.

The DOE claims the initial information they received suggested that headphones may have played a role in the incident. A spokeswoman said the letter was just a “general reminder” about road safety for students.

As of now, Mr. Lu is not expected to be charged and a 13-year-old girl remains in intensive care. Oh, and Mr. Turriciano’s tail is between his legs. 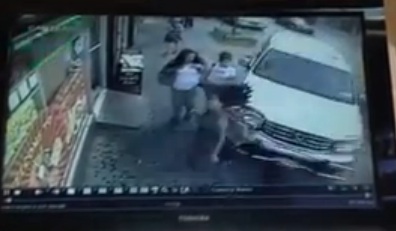