NEWARK – He promised his daughter he wouldn’t cry and Luis Quintana made good on that vow in an emotional speech after taking the oath of office and making history as the city’s first Puerto Rican council president.

The ascent in a politically turbulent time puts Quintana in a position to serve as the city’s acting mayor.

“There’s a separation of church and state, but no separation of us,” said Quintana, the veteran, an immigrant from San Juan who started his political life handing out leaflets for Ken Gibson, who at 25 left a job at Caldor’s to work as an aide to Newark Mayor Sharpe James.

James sat in the front row of a mobbed chamber beside his old dreaded foe, Mayor Cory Booker.

“The families have to be united,” Quintana told PolitickerNJ.com as he navigated the hall in a sea of hugs, hand touches, kisses and wall to wall political insiders, former U.S. Sen. Bob Torricelli, former Gov. Dick Codey and North Ward Center heavyweight Steve Adubato, Sr., among them.

“I am here to unite the families,” Quintana said. “If investors see division here, they won’t come here.”

Wriggling not far below the surface of Quintana’s remarks is the fact that the embattled, crime-riddled city is poised for a mayoral election to replace Booker, who’s far ahead in his Oct. 16 bid to be the next U.S. Senator.

Anibal Ramos, Ras Baraka and Darrin Sharif – all councilmen, and all candidates for mayor – sat with straight backs at the front of the room.

“You’re going to bring some eggs and bacon back home,” Quintana told the sitting mayor, and Booker, face crinkled with humor, lapped up the gesture of friendship.

A veteran who has landed on his feet amid years of political gyrations and gymnastics that have had him proudly – at one time or the other – in the camp of Booker, James, Adubato and Codey – Quintana bucked up Booker even as he burnished another ally near the dais.

John Sharpe James, the former mayor’s son and a candidate for an at-large council seat in the November special election, did a power strut among the dignitaries prior to the swearing-in and stayed up there with Quintana’s family for the flashbulbs when the councilman took the oath of office.

Baraka last month made the motion to make Quintana council president, and when the councilman thanked his colleagues for their support he started with the South Ward candidate for mayor.

Asked if he supports any particular candidate for mayor, Quintana gave an emphatic “No” answer before submitting to the bear hug of Demoratic State Party Chairman John Currie coming up behind him.

Newark sources say the North Ward-based Quintana, who has long been expert at shifting alliances depending on the mechanical demands of the moment, could cause Ramos fits if he lands finally in Baraka’s corner as a cemented ally. A source close to the new council president says he was irritated that the mayoral candidate from his home ward turf initially appeared opposed to his becoming council president.

The job puts Quintana in the pole position to assume the mayor’s seat when and if Booker becomes the senator, as the new council president, arriving to the end of his speech, said, “I don’t want you to say because you are in a ward that it’s a different place. I want you to say we live in the City of Newark.” 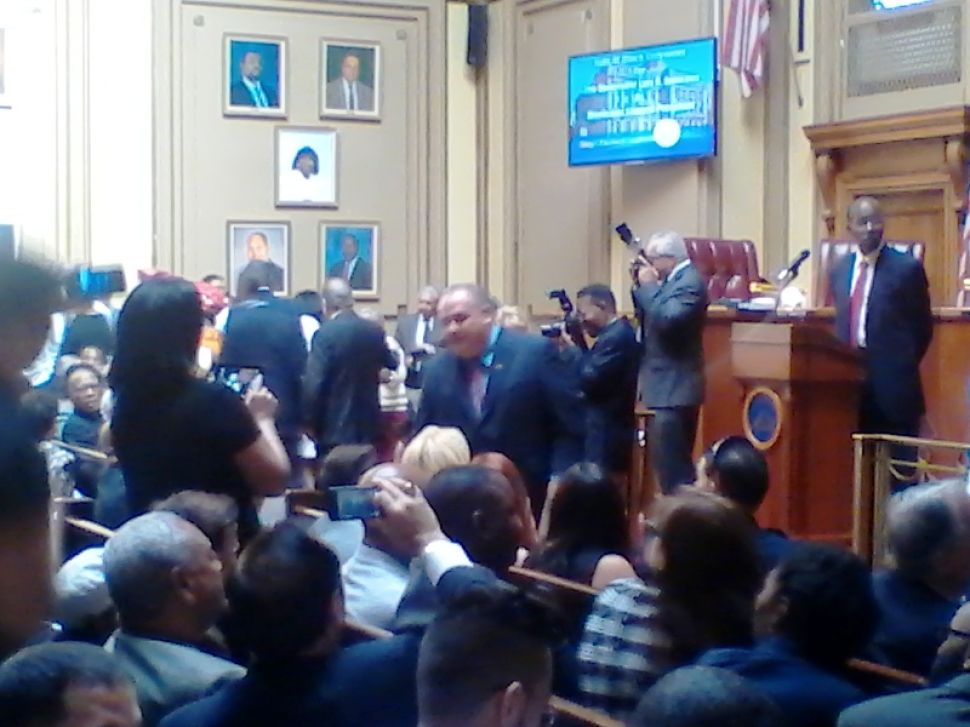