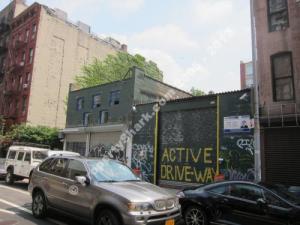 Another change of address on the Lower East Side! Rachel Uffner, one of the early dealers to open in the neighborhood, has joined the gallery game of musical chairs, trading her Orchard Street space for new digs at 170 Suffolk Street, the former home of Show Room, which has moved to Brooklyn. “Always, the idea was to be patient, do five years in that space and then move at the end of it, hopefully to a bigger space,” said Ms. Uffner, who left Orchard Street in late July. Her new gallery is much roomier, measuring just over 3,000 square feet with soaring 20-foot ceilings.

“I think most people that walk in here are just like, ‘Whoa, this is awesome,'” said Ms. Uffner. Though she had visited Show Room for exhibitions and liked its main-floor space, it wasn’t until she was searching for a new space that she saw the second floor–replete with wooden beams and a skylight–that Show Room’s director, Jeannie Weissglass, used as a painting studio.

“I’d heard about this fabled upstairs, and it’s just gorgeous,” said Ms. Uffner, who plans to use it for office, storage and exhibition space. “It’s so nice that I think it needs to be a viewing space of some sort.”

Ms. Uffner’s move is part of a larger migration east over the past two years, with galleries like Lisa Cooley and Laurel Gitlen departing from streets they helped make destinations. “This is a typical story, you can help build up a neighborhood and then you get kind of kicked out,” said Ms. Uffner with a laugh. Her old space, which formerly housed the cooperatively run Orchard gallery, is now a jewelry shop.

Finding a new location in the neighborhood can prove challenging. Large, airy spaces are few and far between and, according to Ms. Uffner, “because of this boom of galleries down here, a lot of landlords have really, in my opinion, overpriced their spaces.” After much searching, Ms. Uffner settled on 170 Suffolk, which also houses JTT gallery, and used to be a plumbing supply store.

“The architecture over here is a little bit different,” said Ms. Uffner. “In some ways it feels closer to Chelsea to me with the garage-warehouse aspect of it.”

Ms. Uffner said she is not sure when the gallery will reopen, but expects it will be in the “late-late fall.” In the meantime, she will tackle light renovation tasks like installing plywood behind the walls, sanding the floors and reconfiguring the lighting, though it means sitting out the September openings.

“This is the first exhibition opening time that we’ll have missed in five years, but I think it’s actually really good marker,” said Ms. Uffner. “I don’t mind taking a breather. I think it’s always good to sit back and think about what you’ve done and what you want to do.”