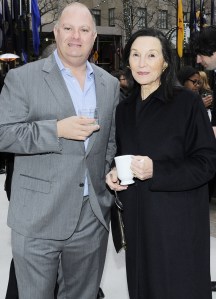 It’s a Haunch of Venison Thursday!

Just hours after we learned that dealer Emilio Steinberger has joined Dominique Lévy Gallery, The Observer also learned that Robert Goff, his co-director at the now defunct Haunch of Venison, has also landed a plum new job. Mr. Goff will join Gladstone Gallery as a director, and will work with artists, museums and new markets like Asia and the Middle East.

“It’s one of the very best galleries in the world and i’m thrilled to be here,” Mr. Goff told The Observer. His new job will have him reaching out to museums around the country for Gladstone’s artists. “I’m from Minnesota and we have great museums like the Walker and the Minneapolis Institute of Arts that a lot of us in the New York gallery world just don’t spend enough time going to or talking to.”

Mr. Goff will work out Gladstone’s West 21st Street space, which happens to be right down the block from the former Haunch of Venison space. “I’m basically 100 feet from where I was before,” he said.